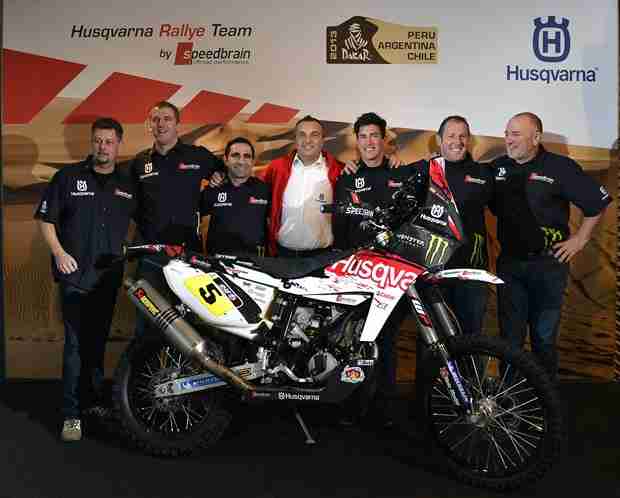 Today at the headquarters in Biandronno, Varese, Husqvarna Motorcycles hosted the presentation of the Husqvarna Rallye Team by Speedbrain who will take part in the 2013 Dakar rally.

The Husqvarna Rallye Team By Speedbrain will be made up of four official riders: Joan Barreda (Spain), winner of the latest Pharoans Rally and second in the Morocco Rally, Paulo Goncalves (Portugal), Alessandro Botturi (Italy) and Australian Matt Fish.

The bike will be the Husqvarna TE449RR by Speedbrain with which the team competed in all 2012 events of the FIM Cross Country Rallies World Championship finishing in second place in the constructor’s standings. The bike’s success rate and its competitiveness has aroused a lot of interest amongst private riders, including seasoned title winners such as Jordi Viladoms who has hired a Husqvarna TE449RR by Speedbrain for the Dakar 2013.

“Rallies, in general, and especially Dakar” — comments Klaus Allisat President of Husqvarna Motorcycles — “are strong and growing communication channels which attract people and have a worldwide media visibility. Husqvarna is a global player which is expanding its business into new markets and this visibility helps us to increase our brand awareness. I’m really confident in our team and I can say we have been working hard to be a protagonist. The bike, the Husqvarna TE449 RR, is competitive and has already showed itself to be fast and reliable. Finally, our riders have worked hard to be perfectly fit for the race, so we’ll be expecting to be on the podium as many times as possible in this race”.

“We can’t wait for the Dakar Rally to get started and are well equipped for this endurance test,” said Husqvarna Rallye Team by Speedbrain, Team Manager Wolfgang Fischer, “The summer preparations ran superbly. We have further developed and optimized the Husqvarna TE449RR by Speedbrain, and our riders have shown regularly during the season that they are capable of competing with the best in the world. They have a say in who wins and who ends up on the podium. And that is also what we have set our sights on for the ‘Dakar’. I would like to thank all the team members, riders, mechanics and engineers who have been so committed and worked so hard on this project. A huge thank you goes to the BMW Group and Husqvarna Motorcycles in Varese.”

The thirty-fifth edition of the legendary rally will set off from Lima exactly a month from today on January 5th, being held on South American soil for the fifth time in its history. The race will head down through Peru, Argentina and finishes some 8423 km (5264 miles) later in Santiago Chile on the 20th of January.