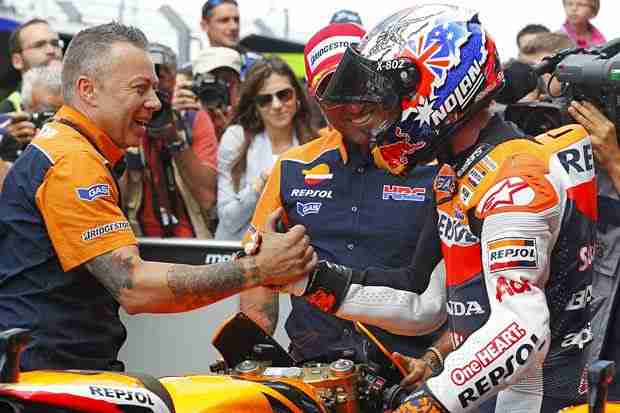 This years MotoGP championship has been primarily dominated by the factory Honda and the Yamaha teams. The lack of the very basic rule in a race ‘its unpredictability’ has resulted in a loss of interest among the fans. Stoner took the top spot today followed by team mate Pedorsa and for a welcome change Dovizioso took third. Lorenzo got cleaned up in the very first lap and just like last season again by a Gresini Honda rider, Alvaro Bautista. The Gresini rider has been given a penalty and will have to start race at the back of the grid at Sachsenring. The Honda team mates just carried on to what was a simple victory. Dovizioso had to do some hard riding in the final laps to get ahead of Spies to get to his second podium of this season. Following Spies was Cal Crutchlow who finished in fifth after being pushed back to 12th trying to avoid the Bautista-Lorenzo incident.

Nicky Hayden was sixth and the best Ducati rider of the day. Valentino Rossi ended up 13th, after he suddenly slowed down on the 13th lap. The Italian was forced to pit with a defective hard rear tire that was shredding pieces all over the track. With Stefan Bradl crashing out on lap two, Lorenzo and Bautista colliding and Rossi having to pit, the CRT’s made their appearance in the top ten with Randy de Puniet taking eighth, followed by Gresini’s Michele Pirro and Mattia Pasini, Danilo Petrucci who was the slowest rider of all the CRTs took 11th place in a field of 14 riders that finished the race.