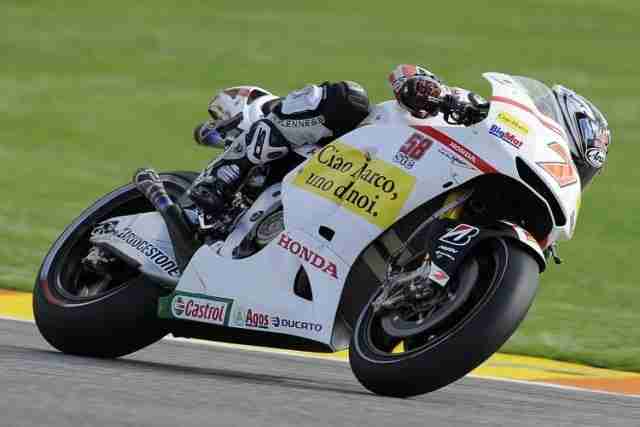 The lights go up on the 2012 MotoGP World Championship this weekend as the Qatari capital city of Doha and the circuit of Losail play host to the 64rd edition of the world’s oldest motorsport. There is extra excitement this year, with the novelty of night racing added to by the dawn of the CRT MotoGP era and Moto3. Claiming Rule Teams represent the future of elite motorcycle racing and Team San Carlo Honda Gresini are taking on the challenge with a new bike featuring a chassis made by FTR and a Honda CBR 1000R engine, to be ridden by Michele Pirro. Meanwhile Team San Carlo Honda Gresini will also be battling on par with the top riders in the class, with Alvaro Bautista riding a Honda RC213V. After intense testing at Sepang and, most recently, Jerez, the talented Spaniard is close to finding an optimum feeling with the Japanese machine and a few small changes should allow him to step up his already impressive race pace and fight for glory at the front of the pack. Pirro has plenty more work to do, having only ridden his new machine three times during which time it has shown excellent potential but encountered understandable teething problems. It is a difficult new chapter in the history of Team San Carlo Honda Gresini because it goes ahead without Marco Simoncelli, a situation that provokes mixed emotions. However, the whole team are committed to their passion and determined to continue with Marco always in their hearts.

“Finally we’re hitting the track for the first race after preseason testing at Sepang and Jerez. I am early looking forward to racing again because testing is pretty stressful with so much work to do in and out of the box, the days are endless. Now is the time for the real action, for us to give everything to the task and experience that adrenaline that only racing provides. This will be my first race with Team San Carlo Honda Gresini and it’s exciting because the guys are working well and I think we have made the connection we need for me to exploit my potential in Qatar. I like the circuit, it’s fast and flowing and has a nice long straight. Unfortunately I am still not keen on the idea of racing at night, even though the track is well lit it is still not the same as racing in the day. It is also usually quite humid, which makes the track surface slippery and even though the race takes place earlier this year I still think it will be a problem. Anyway, it is an investing event and I have the machinery to be fighting at the front so I will be giving my best to do that.”

“I am feeling nervous but excited ahead of this new challenge. Obviously I know I don’t have the means to run at the front but I will be giving my all to be amongst the best of the CRT entrants. Unfortunately we only have 500km on the clock so we know we have a lot of work to do with the new bike but we know the potential is there and we will do everything we can to be as competitive as possible in Qatar. The team are working hard, with a lot of enthusiasm and I am getting along well with all the guys so I am sure we can take a big step forward from Jerez. I like the circuit and racing at night is appealing.”

“It all starts again now but I can’t honestly imagine right now what this first Grand Prix is going to be like for us. It is a brand new championship for everybody and we are taking on a new, difficult challenge. We believe in it, we enjoy it and maybe that is a defect or maybe it’s a quality. We want to do well and we think we can because Alvaro has a good bike and every chance of running at the front. Testing went quite well and we have the potential to be fighting for fourth, fifth or sixth place. We suffered at Jerez because of two minor but needless crashes that our engineers have been studying so that we can help Alvaro get his confidence back as soon as possible. This is a chance for Alvaro to show his ability but also for us to start looking to the future because Marco’s tragedy hit us hard. Marco is and always will be in our hearts, the pain is still fresh and strong but we decided to carry on, we are doing it with Alvaro and this is the best way. It also helps that we have a new challenge in the CRT project with Michele Pirro, making his debut in MotoGP. It won’t be easy and it has already been a challenge just to get the bike on track and have Michele with us in Qatar. It is a completely new project and we are a little behind with it , having done less testing than we would have liked at this stage. Really we have only been out at Jerez but the feedback was good, the bike is sound and the engine is strong. There is a lot of work to do and we know it but I am fascinated by the concept of CRT and I am proud of the enthusiasm shown by my guys to get involved. CRT has virtually been forced on us by economic circumstances but i think it will be a successful formula and Team San Carlo Honda Gresini can be a part of that success. ”