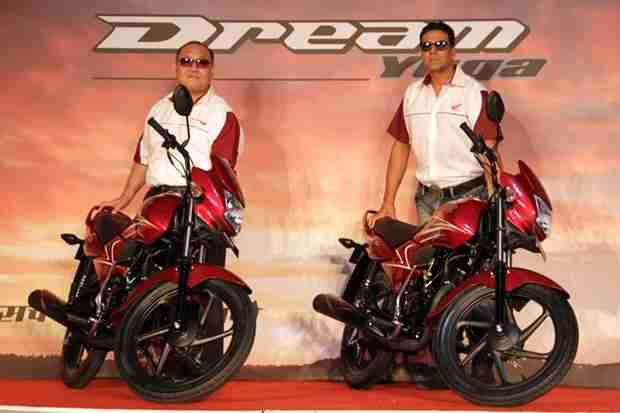 Honda Motorcycles India has the launched the Dream Yuga, a 110cc commuter motorcycle targeted as a mass-market motorcycle for India and is its cheapest motorbike worldwide. Honda’s 110cc Dream Yuga motorcycle will cost INR 44,642 ex-showroom Delhi and will compete with Hero’s Splendor brand, India’s biggest-selling bike. They also announced to rope in bollywood actor Akshay Kumar as a brand ambassador for the company. The Dream Yuga was first unveiled at the Delhi Auto Expo 2012. The Dream Yuga will be available in five colours. Although the styling isn’t very different from the Shine it  does boast features like a self-starter, alloy wheels, long seat, full chain cover and tubeless tyres as options. The bike is powered by a 110cc single-cylinder Honda motor that makes 9bhp.

Honda expects India to account for 30 percent of its global motorcycle revenues by 2020, up from 13 percent currently, said Keita Muramatsu, president of Honda Motorycle & Scooter India at the bike’s launch in New Delhi.

“Our long-term target is to be the number one in India by 2020,” said Yadvinder Singh Guleria, marketing head for Honda India. He said the company targets sales of 300,000 Dream Yugas in the current financial year that ends in March 2013. Under the joint venture agreement, Honda was banned from directly competing with Hero Honda vehicles.

Honda’s foray into the mass-market arena is part of a larger assault by Japanese motorcycle makers ramping up capacity and targeting volumes in a market that grew 14 percent in the 12 months to March 2012. Honda sold 220,487 two-wheelers in India in March, 50 percent more than in the same month last year, and marginally more than Bajaj.