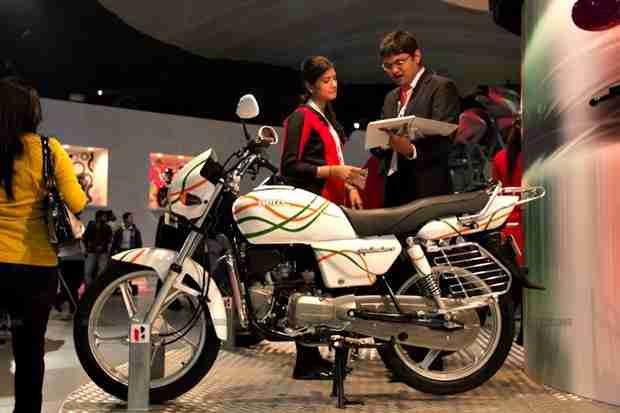 Its been almost an year since the Hero – Honda split and now India’s largest two-wheeler maker Hero MotoCorp has forayed into the international market under its newly incorporated brand identity by launching as many as 14 models in Sri Lanka. The company has appointed ABANS Group as its sole distributor in the island nation to sell the products through a channel of 50 outlets.

“Sri Lanka has been a very important market for us, and we have a loyal customer base in this country. It gives me immense pleasure to announce the choice of ABANS group as our partner in this market,” Hero MotoCorp Managing Director and CEO said Pawan Munjal. The Sri Lankan market plays a significant role in the company’s plans to expand its global footprint and so it has chosen the country as the first international market to launch the new brand identity, he added. Sri Lankan cricket star Kumar Sangakkara introduced the 125cc motorcycle ‘Glamour’, while Miss Sri Lanka Stephanie Siriwardhana unveiled the scooter ‘Pleasure’. Elaborating its plans for other global markets, Hero MotoCorp said the company will “soon commence its exports to new international markets in Africa and Latin America in order to reach the stated objective of 10 per cent of its total volumes from international business in the five years”.

“These products are being distributed through a network of more than 50 outlets spread across the country, with an equal number of new outlets to be added in the next one year,” the company said. In December 2010, the Indian promoter of Hero MotoCorp, the B M Munjal family had agreed to buyout the entire 26 per cent stake of Honda in Hero Honda for Rs 3,841.83 crore. It had brought an end to a 26-year-old successful joint venture.