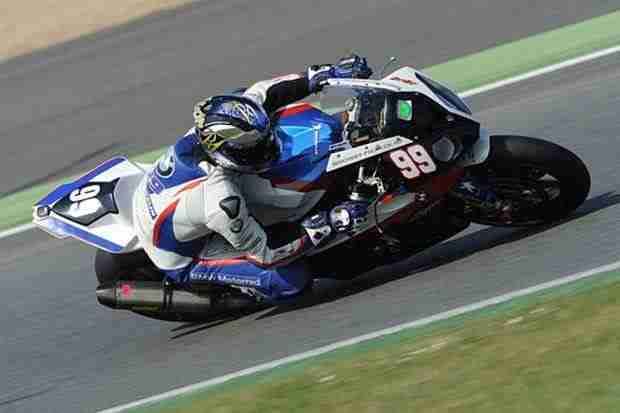 The BMW S 1000 RR was the bike to beat at the “8 Hours of Doha” (QAT), the second round of the 2012 FIM Endurance World Championship. BMW Motorrad France Team Thevent with riders SÃ©bastien Gimbert, Erwan Nigon (both FRA) and Damian Cudlin (AUS) fulfilled its mission and celebrated a dominant win at the “Losail International Circuit”. After the setback at the season opener, the iconic 24-hour-race “Bol d’Or” at Magny-Cours (FRA), the BMW Motorrad HP Race Support backed squad now is back in the fight for the 2012 world championship title.

The #99 RR was dominating already in free practice and qualifying, with BMW Motorrad France Team Thevent securing its third Qatar pole on its third appearance at Doha. Nigon did the first stint and pushed hard to pull a gap on the field, setting the fastest lap of the race in the process. When the safety car was deployed in response to an oil spill, he pitted and handed the RR over to Gimbert, who retook the race lead on lap 39 and was able to quickly re-establish a comfortable gap back to second place. From this point on, Nigon, Gimbert and Cudlin were able to control things from the front, helped by the perfect pit stops made by the team’s mechanics. After eight hours, Nigon took the chequered flag with a three-lap advantage to give BMW Motorrad France Team Thevent and tyre partner Michelin their first win of the 2012 season.

The victory promotes BMW Motorrad France Team Thevent to fourth in the 2012 Endurance World Championship standings with 35 points, just 19 points behind the series leaders SERT (54) with three rounds to go. The next race is the 8-hour-race at Suzuka (JPN) on 29th July.

“I’m pleased that we’ve been able to bounce back from the disappointment of the ‘Bol d’Or’ with an emphatic win here in Qatar”, comments Team Principal Michael Bartholemy. “The team and all three riders have done a fantastic job this week, and for that I’d like to say a big thank you. I’d also like to thank BMW, in particular Marcel Driessen and Berthold Hauser, as well as Sachar Rodenbusch, Bischoff and Scheck and all our sponsors and partners for their continued support, without which we wouldn’t be here. It’s a credit to Michelin that we were able to use the same tyre throughout the race, despite the extremes of temperature. The win here means we’re well and truly back in contention for the championship title, with just 19 points separating us from the top of the standings. I hope we’ll be able to reduce that gap even further next time out at Suzuka.”

“The start of the race wasn’t easy, because it was so hot, but I pushed really hard to try and pull a gap straight way, and it worked perfectly until the pace car came out and everyone closed back up again”, Nigon sums up. “SÃ©bastien managed to re-establish the gap during his first stint then, together with Damian, we were able to control the race from the front. The win here today is good for the team, for BMW and for Michelin, who all did a great job for us, but it’s also good for the championship. With just 19 points between us and the top of the standings, it’s all to play for in the final three rounds.”

“The BMW S 1000 RR was the fastest bike out there; the Michelin tyres worked perfectly, everyone in the team was on top of their game and all three riders were on the pace from the start”, Gimbert confirms. “It’s an important win, because after missing out on points at the ‘Bol d’Or’ it puts us back in the battle for the championship. Now we must go on full attack at Suzuka, because I would really like a podium finish there.”

“Winning here in Qatar was a great result, not just in terms of the race, but also in terms of the championship, which is a lot closer than it was after the ‘Bol d’Or’”, Cudlin reports happily. “With the BMW S 1000 RR and the Michelin tyres we definitely had the strongest package here, but that was also true the last two years when bad luck conspired against us. I have to admit, given our luck here in the past, I breathed a big sigh of relief when Erwan finally took the chequered flag!”

The BMW S 1000 RR also was successful in the Superstock class, with Team Penz13.com Kraftwerk Herpigny Racing crossing the line in third and celebrating its second podium position of the 2012 season. In the overall classification, the squad with riders Pedro Vallcaneras (ESP), Michal Filla (CZE) and Gregory FastrÃ© (BEL) finished on a strong seventh position.

“This was a race that you can enjoy to the full. We are more than happy about this victory”, says Berthold Hauser, Head of BMW Motorrad HP Race Support. “This win of our squad was a well-deserved one because we were perfectly prepared. The collaboration between the team and HP Race Support is highly efficient, and this is the key to being so successful on the highest level of endurance racing. A big thank you to the team and to all sponsors and partners for their support. A special thank you goes to Michelin. Here, the co-operation became even closer and more intense, a fact that was proved by this performance. Over the whole race weekend, the guys were unbeatably fast despite the strong competition. It would only need a small, but costly mistake, to eliminate us or put our success in danger. Clever race strategy, perfect team work and the recognising and avoiding of dangerous situations combined with this race pace were the key to this dominant win. We caught up to the front of the classification and by continuing this good work, we still can set our eyes on reaching the big goal of winning the title in the Endurance World Championship. Congratulations also to the Penzkofer Team who showed a strong performance to securing another podium in the Superstock class.”