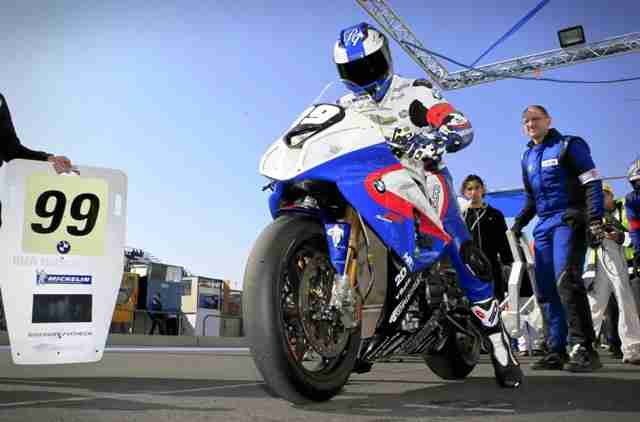 However the race weekend at Magny-Cours turned out to be a rollercoaster ride for the French-Belgian squad and its riders Damian Cudlin (AUS), SÃ©bastien Gimbert, Erwan Nigon and Hugo Marchand (all FRA). Track conditions were difficult on Thursday, with many of the leading teams suffering multiple crashes. Marchand crashed the BMW S 1000 RR heavily when another rider dropped oil on the circuit during free practice. The bike was so badly damaged that the team was forced to use the second bike. Then Cudlin fell foul of the conditions and also crashed heavily, leaving this bike too damaged to continue and the team had to sit out the final two Thursday qualifying sessions.

Nevertheless the team bounced back. Both RRs were rebuilt for Friday’s final qualifying sessions and a solid performance by all four riders led to a promising fourth place on the grid. After the successful qualifying, the riders were determined to fight for a podium finish. The 24-hour race began well for the team, despite extremely tricky conditions. Cudlin started with a double stint and improved to third position. Unfortunately, just two laps before he was due to handover to Gimbert, Cudlin crashed heavily at the end of the straight and was forced to push the bike back to the pits. Once the damage had been repaired, Gimbert took to the track, but was forced to return to the pit box after just one lap. Following a further inspection of the bike, it was decided to withdraw from the race on safety grounds. Cudlin suffered a suspected mild concussion in the crash, but was otherwise uninjured.

“It was a big crash and when the bike was returned to the pit box we could see it was very badly damaged”, reports Team Principal Michael Bartholemy. “The team repaired the obvious damage quickly to get SÃ©bastien back into the race, but he had a problem on his very first lap and returned immediately to the pit box. On further inspection it was apparent that the damage was more extensive than first thought, especially around the bottom of the engine. Without opening the engine it was impossible to assess the damage properly, leaving us with no option but to withdraw from the race. Obviously, it is not the start to the season we wanted but the safety of our riders, and our rivals, must come first. After internal discussions involving all of our technical partners, we decided to stop rather than chance putting others at risk.”

“Obviously, we are very disappointed, because that was not the season start we expected. It was a real pity and very frustrating for all of us that we had to retire so early from the race after this heavy crash”, adds Berthold Hauser, Head of the BMW Motorrad HP Race Support specialist department. “This prevented us from showing our true potential, because the team and the bike were very well prepared and a top result was more than possible. We all decided together to retire the bike from the race as the damage was too bad. Now we are all looking forward, work closely together and even more determined to show a top performance at the next races to collect the points we were denied at Magny-Cours. We are far from giving up our title hopes!”

The team will now prepare for the second round of the 2012 FIM Endurance World Championship, the eight-hour race at Doha (QAT) on 9th June.