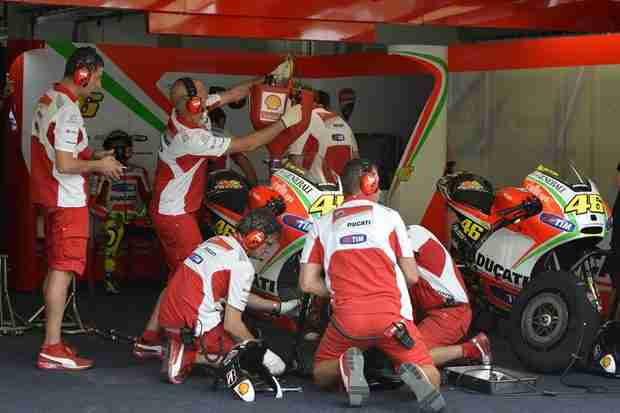 The second free practice session at the Malaysian Grand Prix was affected by a typical tropical downpour that gave way to the sun just before the start. Riding on the track, which was neither completely wet nor completely dry, was rendered useless for the entire session. Valentino Rossi paid the consequences, as he had intended to try some changes to the balance of his Desmosedici in order improve rear grip.

In the morning, Nicky Hayden had started doing some comparative tests with a swingarm with a different stiffness, which Rossi had begun using after Misano. Like his teammate, the American will work on improving grip tomorrow.

“With my injury last winter, I didn’t really do much meaningful riding here during testing, so it’s hard to compare the bike from then to now. The main thing we’re working on is finding more edge grip, and we made a couple of improvements there. I was almost two seconds faster than last year here during FP1, which is nice. I tried the new swingarm, which definitely gave me better feeling at the rear. Then this afternoon was really strange. As can happen at long circuits, the track was completely wet on one part and completely dry on another, during the same lap! I did two laps, just to feel the wet conditions in case that’s what we have on Sunday. Anyway, I definitely felt a little better today than I did in Motegi, both with my wrist and on the bike, so hopefully we can have a much better weekend.”

“We’ve been a little unfortunate with the weather in recent races. This afternoon it rained right before the session, which made it difficult to work. It’s a shame, as we had two or three things to try with the balance of the bike after we were pretty slow this morning. We had continued working with some changes that we used at Motegi, where they’d helped us to have a little more grip under acceleration. Here, though, they weren’t as effective because they cause a lot of understeer. This afternoon it was important to be able to work because we wanted to return to a more standard setup, like at Aragon and Misano. I tried riding a little in an effort to understand as much as possible, but it’s difficult in these conditions. There’s nothing we can do about it, so we’ll have to wait until tomorrow.”