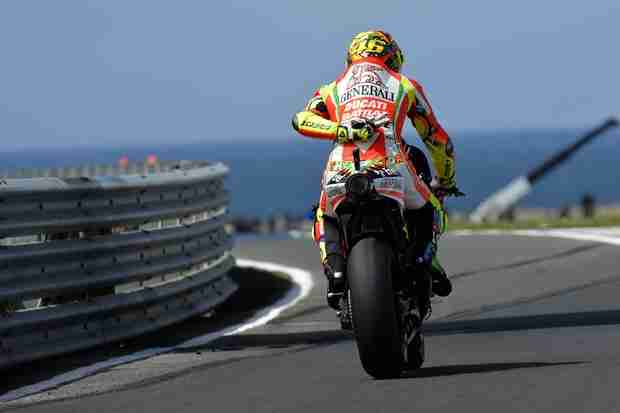 Phillip Island’s typical springtime weather conditions had the MotoGP riders dealing with cold wind and occasional raindrops on the first day of practice at the Australian Grand Prix. Nonetheless, Valentino Rossi and Nicky Hayden were able to work on their setups during the first two free practice sessions, as they sought a competitive pace in the fast corners without sacrificing traction on acceleration. The Italian believes he is on the right path, but both he and the American have to diminish the bothersome chatter they’re experiencing.

“In the end, this first day didn’t go too badly, considering that we’re not so far from Bradl and Bautista. We improved the bike’s setup and I was able to go quite a bit faster in the afternoon compared to this morning. I also did some nice laps with the used tyre, which is important. Tomorrow we’ll try to make another step forward and look for a balance that allows me to ride well in the fast corners without losing too much traction in acceleration. Here we do lots of accelerating on the left side, so the tyre temperature goes up and the tyres begin to slide more and more. We’ll see tomorrow. We’ll have to continue improving as we did between today’s two sessions, and then we’ll also decide which tyre to use.”

“It hasn’t been a great day. The conditions weren’t easy for anyone. It was cold and windy with a few spots of rain, which makes it tough on a fast track. I didn’t have a lot of confidence in the fast corners, as the bike was moving a lot and the track felt very bumpy. I had a lot of chatter and vibration, so it’s tough to push hard. Tonight we need to think about how we can improve the feeling and feedback and hopefully do a big step tomorrow.”