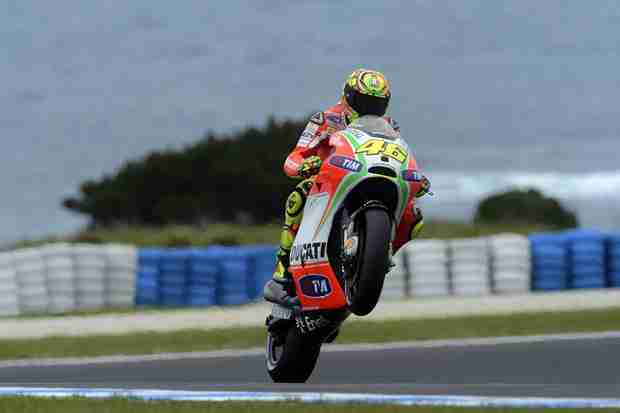 Although precipitation held off until the final few minutes of today’s qualifying for the Australian Grand Prix, the MotoGP riders nonetheless had to deal with chilly conditions for the entire session, which saw Ducati Team racers Valentino Rossi and Nicky Hayden post the eighth and tenth best times, respectively.

The Italian was relatively pleased with his pace while using a race setup, although he still hopes to make some final improvements for tomorrow. The track’s bumps and fast corners proved to be particularly challenging for the American, whose team will try to take a step forward during the morning warm-up session.

“Qualifying went okay, as my pace is more or less at the level of Bradl and Bautista, with the two Yamahas of Dovizioso and Crutchlow a little faster, but only by some tenths. I’m pretty consistent. I did a 1:31.7, a decent time, with a tyre that had about eighteen laps on it, so that’s not bad as we approach the race. We have a little too much vibration and understeer with the soft tyre, so I wasn’t able to improve much with it, although fortunately, it was just enough to make the third row. Tomorrow morning we’ll try to refine the final details and then we’ll see. It will be a long race, so we’ll have to see what conditions we find and what pace we’re able to do.”

“Unfortunately, things haven’t gone much better today, as we’re still having trouble finding the right direction. I’m breaking traction on the edge of the tyre, and that causes a lot of movement, especially in the fast corners. Also, the bumps are making it difficult to stay online. I made a mistake in T1 on my last good lap. Then I had a better lap going at the end when the rain came, at which point it was too much to risk. Tomorrow is when it counts, and we’ll probably make a big change to the bike. Starting tenth is difficult, but I really hope I can be competitive.”