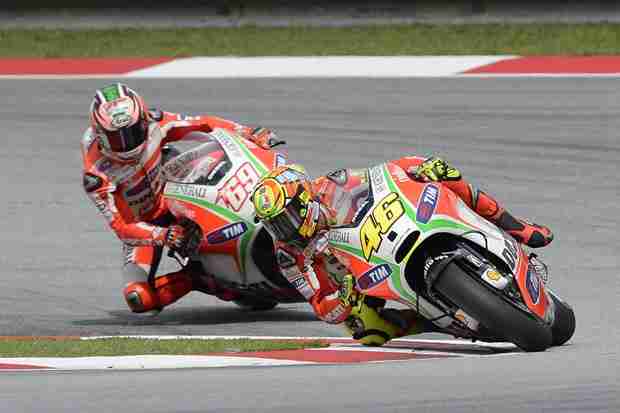 Fresh off an eventful race at the Malaysian Grand Prix, the Ducati Team makes its way to Australia for the final weekend of a three-round overseas stint. Among the riders, the spectacular Phillip Island circuit is one of the most popular on the MotoGP calendar, thanks in large part to its spectacular layout. Situated next to the Bass Straight, it features a variety of corner types, though it’s best known for its thrilling faster turns.

In the past, the Ducati Team has tallied four wins at the Australian Grand Prix, and both riders have successful records there as well. Valentino Rossi has accumulated five victories and an additional six podiums, while Nicky Hayden has two poles, three podium finishes, and the lap record, set in 2008. Phillip Island is also famous for offering inclement weather conditions, and forecasts indicate that the tendency could well hold true for this weekend’s event.

“Phillip Island is always a fantastic track, as it’s special and unique. It’s very fast and is near the ocean, which opens up in front of you after the main straightaway, and there are corners that are different from each other, with varying speeds and steepness. It’s a track that a rider has to love. Racing a MotoGP bike there is a lot of fun, but it was a difficult weekend for us last year, so we’ll have to try very hard to do better. In addition, the forecasts show that there will be inclement weather, with rain and cold, so we’re expecting challenging conditions. We’ll really have to do our best.”

“Phillip Island is always a great GP, one of the best. The track is really fast and flowing, and I’ve had some good results there in the past. I really like so much about it: the atmosphere, the fast corners, and the fact that it runs counter-clockwise. We’ve also got some work to do. I’ve liked the new chassis since I’ve been on it, but now it’s time to find a direction for improving it further. We also want to figure out how to regain the advantage we used to have in the rain, and judging by the forecasts, we might get a chance to work on that in Australia.”

“Phillip Island is a track where we’ve done well in the past. We’re coming off a strange weekend at Sepang, where the race was affected by the weather conditions, and where–although we could have done better–we had a decent race. The forecasts indicate it could also rain in Australia, and it’s always cold when we’re there. If that’s the case, we’ll start with a setup that wasn’t bad in Malaysia, but we know that we’ll have to improve, because the others are now more competitive in those conditions. We’ve identified some ideas that we hope could improve our performance in the wet, and we’ll try them on the track if the track conditions are similar to those that we had at the last race.”