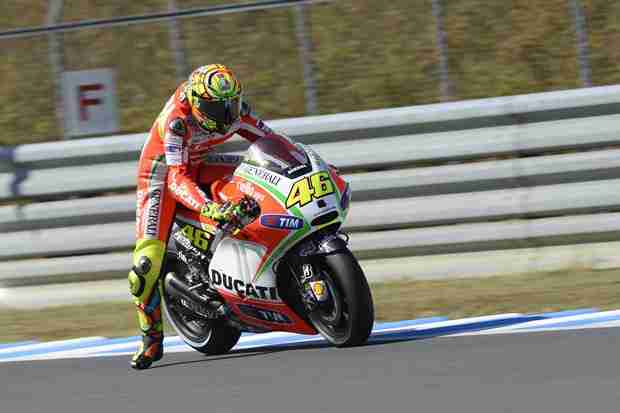 Valentino Rossi and Nicky Hayden will start tomorrow’s Japanese Grand Prix from the third and fourth rows of the starting grid, respectively. In today’s qualifying session, both riders improved their performance compared to the free practices, but while the Italian was relatively satisfied with the work carried out over the course of the four sessions, the American had hoped to find a better setup.

In tomorrow’s morning warm-up session, Rossi will look for a few final setting refinements, while Hayden will try to make some changes in order to improve his consistency.

“The position, ninth place, certainly isn’t the greatest, as I had hoped to start from the second row. Still, I think that we worked well. We improved in every session, and again in qualifying today we made good progress. 1:45.9 is a nice time, half a second faster than last year, even though it wasn’t enough to be further forward. Anyway, we managed to lap at a decent pace and more consistently, and that’s positive. Tomorrow we’ll see if it will be enough and if we’ll be able to move up some positions. We’ll also have to decide tomorrow which tyre to use, depending on what the temperature is.”

“Today didn’t really go any easier than yesterday. I had some problems at the start of qualifying and couldn’t get a good rhythm, but once I started putting the soft tyres in, the grip improved and the bike felt better and better. Then at the end, I had a lot of front chatter that was holding me back, including on my best lap, and there were a lot of waving yellow flags on my last run that didn’t help. Unfortunately, I didn’t really get in a good lap, and I didn’t have a good rhythm either. Still, the team is working hard and hopefully tomorrow we can improve and try to do a decent race.”