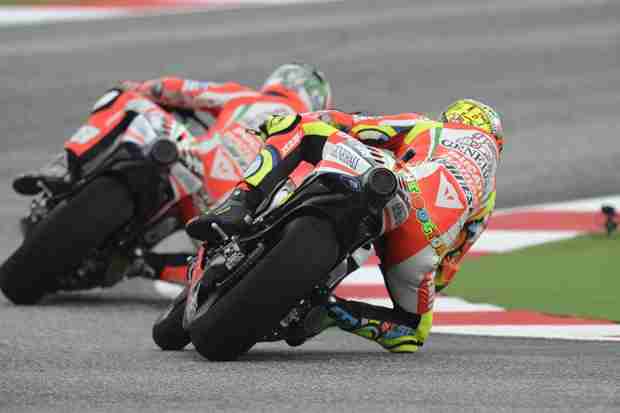 Following three weather-affected free practice sessions for the Gran Premio di San Marino e della Riviera di Rimini, qualifying took place on a dry track. Valentino Rossi, who found a good setup for his Desmosedici, equipped with a new frame and swingarm, rode to the sixth-best time and will start tomorrow’s race from the second row.

After having ridden well in the wet morning session, when the requisite slower pace put less stress on his hand, Nicky Hayden had difficulty improving. The right hand, which is still healing following his crash in Indianapolis, still lacks the strength to push to the limit, and the pain becomes quite severe after a while.

“Today went pretty well. The work we did in the test was definitely positive, but we also tried a setup today that I really liked, and which allowed me to be faster. That’s why we did the entire session riding at a pace that was closer to the others, improving exit after exit. I thought I could have done even better and gone into the low 1:34s, but it’s okay anyway. We’re on the second row, and we’re not far off on pace either. We’ll try to refine a couple of things tomorrow in the warm-up because I think that the others will improve.”

“This morning in the wet was great. Even without working on the setup, the bike was good right away. Then the track dried out, but I didn’t go out with slicks because I didn’t want to take any risks. The qualifying session went by really quickly. We made a couple of little adjustments and got going better, but although I hate to use excuses, my hand was quite weak and painful. When I went out for the last exit, there was a bunch of CRT traffic. I thought I had time for one more flying lap to try and get on the third row, but the chequered flag was out when I came by. We’ll see how things feel in the morning.”