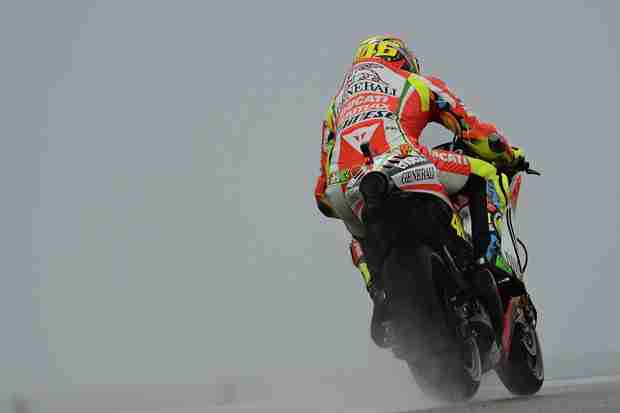 The first two free practice sessions at the Aragon Grand Prix were affected by bad weather. The first, which was postponed by one hour in order to clean up an oil spill that had occurred during the Moto3 session, was rendered useless by mixed conditions, which were neither entirely wet nor entirely dry. The second, which was completely wet, could prove to be important if the forecasts calling for rain in tomorrow’s qualifying session are correct.

Taking advantage of the situation was Nicky Hayden, who was fourth overall at the end of this first day, while Valentino Rossi, eighth, was slowed by a gearbox problem that kept him in the garage with his bike toward the end of the afternoon session.

“More rain, but you can’t change the weather. This morning we did a couple of laps just to get a feel for things, but we waited once it dried out. It was wet in the afternoon, but I didn’t enjoy riding in the rain as much as I usually do. The track itself was pretty grippy, as we were about ten seconds off my dry time here, which isn’t bad on a track this long, but I was missing some rear grip on corner entry and at the first touch of the throttle. We’ve got to improve that. I only rode with the new chassis today, but with the rain, I’m not really able to give an impression. They’re calling for more rain tomorrow, so we might have to manage the rain tyres. When it dries, this track can chew them up quickly, so we might need to make sure we save enough for qualifying. We’ll see what tomorrow brings.”

“We had a problem with the gearbox on the bike we were using, and I lost a bit of time in the garage. We had to prepare the second one in a hurry, and then I rode with that. It’s a shame because with these conditions, the tyres only get up to temperature after a few laps, so when I was able to go back out, I didn’t have time to push hard. Our potential is certainly better than this. We can be more competitive, and we’ll try tomorrow in qualifying which, according to the forecasts, could be wet like today. We’ll try to get a good starting position and then we’ll see for Sunday, because it looks as if the race might be dry.”