Can a motorcycle be faster than an air fighter? Karel Abraham answered this question at Brno International Airport last Sunday. He showed to the spectators assembled that it can be. In a battle against the legendary Czech army jet L-29 Dolphin and a Porsche 911 GT3 driven by champion Tomas Micanek, Karel Abraham took victory in quite the style. The race was held on the main runway of Brno International Airport. Both racers on ground started when the jet fighter was running over them at a speed of approximately 200 km/h. The winner was set in few last meters before the chequered flag with both the car and the bike doing close to 300 km/h. “I need more time to accelerate to this speed,” explained Pavel Vesely, retired Czech Army pilot piloting the Dolphin. 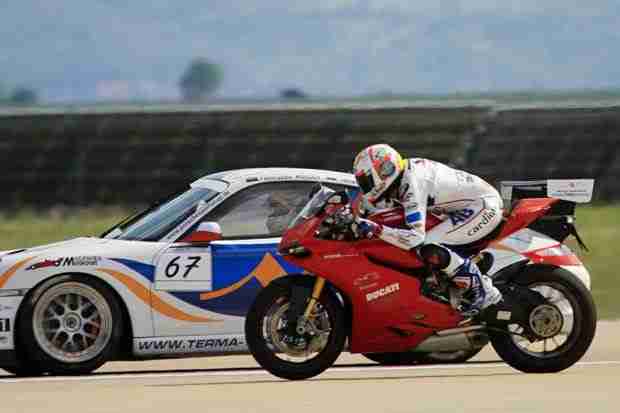 Karel Abraham was excited by new 1199 Panigale borrowed from Ducati Slovakia. “It´s an exciting bike. I really would like to ride it at the circuit – not only in straight. It didn’t seem to me we were close to 300 km/h. The runway is very wide, so you don´t feel the speed as on a race track.” 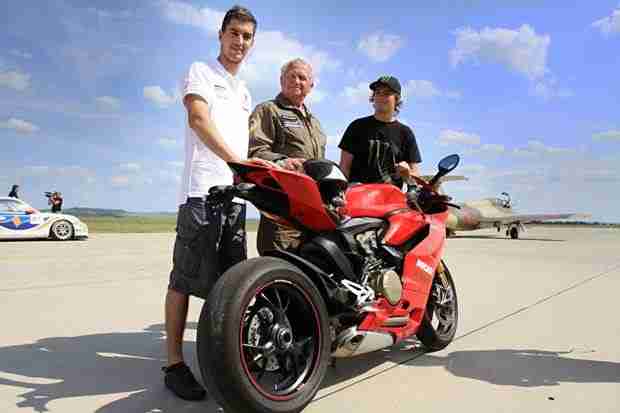 Tomas Micanek in the Porsche passed the checkered flag just behind Karel. “It´s a shame that I couldn´t drive the faster RSR version, because our mechanics were still working on it and preparing it for the next race. I think in that case we would see  the Porsche passing the finish line in first place,” said Tomas. “Yes, and If I rode the MotoGP Desmosedici, guess who´s going to be the winner,”  said a laughing Karel.