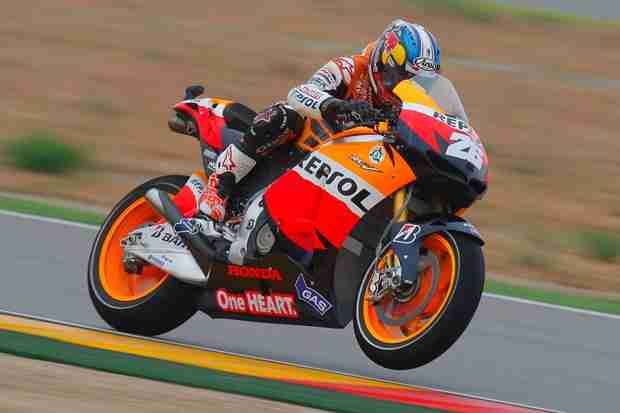 Dani Pedrosa is one of those riders that can never be ignored and taken for granted, even with a touch of misfortune at Misano and a crash in the wet yesterday, today he went on to win in dominant style. This win, his fourth this season, brings him within 33 points of Lorenzo and with four more races this season, things are getting interesting for the championship battle.

The race began with Lorenzo having got a good start began to pull away from the rest, but  an aggressive Pedrosa, kept at his tail till the 5th lap, before passing him on turn 12. Lorenzo tried to regain the top spot in lap 9, but almost ended up high siding and after a dramatic save seemed content with the second spot. 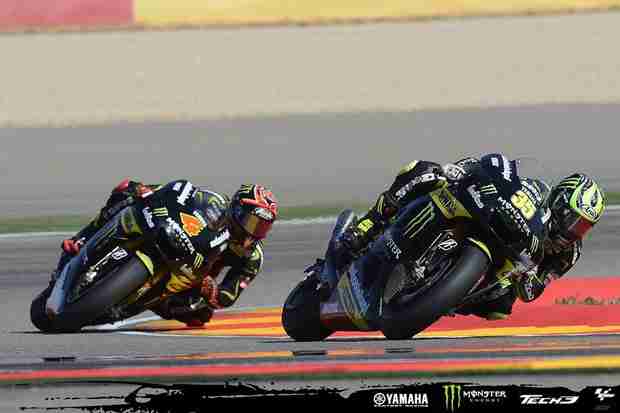 With the top two spots pretty much settled the race was now for the number three spot. A confident looking Stefan Bradl took the third spot from Spies but almost immediately crashed out. This left the three Yamaha riders, Dovizioso, Crutchlow and Spies in a fight for the third. Dovizioso made his move on Spies with just ten laps to go and passed him quite easily, his team mate Crutchlow followed suite the very next lap and stuck to Dovizio’s tail pushing him for a mistake. Dovizioso kept his cool and rode to his sixth podium of this year.

Spies came in 5th followed by Alvaro Bautista, who made a lot of ground after having started from the 12th spot. Jonathan Rea continued to show a powerful quick learning performance and came in 7th. Rossi came in behind Rea and had a unlucky race, with running off the track twice. Nicky Hayden ran off track on the final turn and crashed up on the boundary fence, he was lucky to escape without any major injuries. Karel Abraham and Aleix Espargaro came in next followed by Randy de Puniet and a Hector Barbera who seemed lost after his crash during warm up practise. 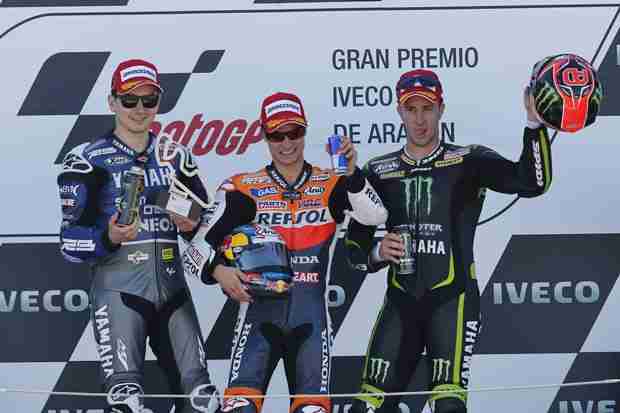 “It’s been a tough weekend in general, with discussions about the last race with race direction and the crash in qualifying yesterday which created a lot of hard work for the mechanics. In the race I remained calm and was able to focus, Jorge began very fast in the early laps but I was able to stay with him and then after a few laps I saw I could increase the pace and I passed him and tried to find my own rhythm. I was concentrating so hard that I almost forgot that it was a race, then I realised there were only 4 laps to go!

I had a few issues with the clutch into the corners, switching down, as I did yesterday, but overall the bike was working well so thanks to all my team for their hard work last night and to my fans and family for their support, this victory is for them all!”.

“I was thinking to try for the win at the beginning of the race and if that was not possible then second place was the best possible result for the Championship. Dani had a better pace in the end, I was stronger at the start then little by little I was a bit slower, the tyres were slipping a lot and I couldn’t follow him. I nearly crashed in one corner and decided then to stay in second place and wait for the end of the race.”

“It was a very good race and I am very happy to be back on the podium. It has been a difficult weekend with the weather but the Monster Yamaha Tech 3 Team did a fantastic job and the bike was very strong in the race. It was a very strategic race for me because right from the start I was quite slow in a few corners so I had to work very hard to stay in front of Ben and Cal. I knew Cal would be pushing very hard at the end of the race because a few times we have battled together like this and I have beaten him, so I knew he would not be giving up without a fight. He tried in the same place on the last two laps but at that point he couldn’t stop the bike and I had a better exit speed to immediately take the third position back. And I know I am very strong on the brakes, so going to the last corner I was confident I could keep him behind me. It is great to be back on the podium, so I want to say a big thanks to my crew for doing such a wonderful job again.”