The fifth edition in the South American continent, the Dakar will be hosted by three countries that have unveiled their characteristics over the last few years. To end the suspense, the route will be hitting the high notes and hitting hard from 5th to 20thJanuary next year. For the first time, the desert stages will make their appearance in the first few days of the rally. After reacquainting with Lima, the riders and drivers will get straight to the heart of the matter. The rest day that will take place in San Miguel de Tucuman will be more than welcome for the competitors, because, to reach Santiago, they will have to go the distance: more than 8,000 kilometres. 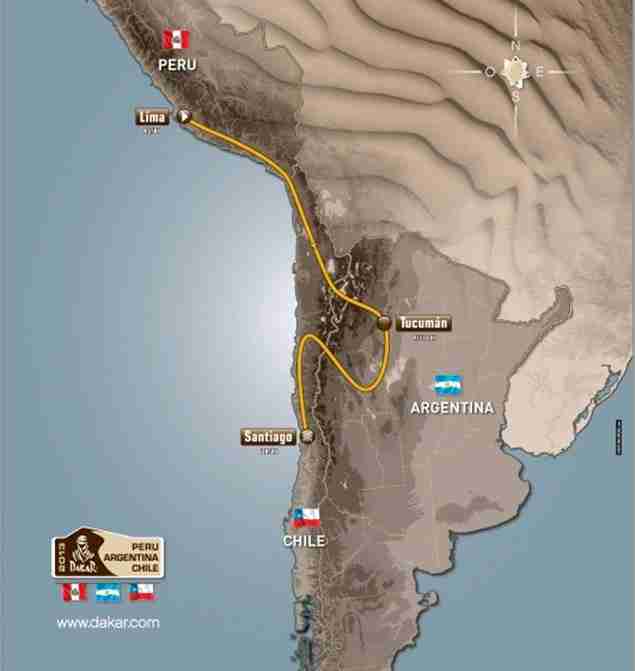 The discovery of Peru thrilled everybody who reached this stage of the rally in 2012. This time, all the riders, drivers and crews will be able to test their mettle on the largest chains of dunes crossed on the continent since 2009. The Dakar has never before started in the middle of the desert in its history. Whilst the dosage of difficulties will decide just how and when the pressure rises, there will be no room for improvisation in 2013.

Argentina and its many facets  (5 stages and rest day)

Once it crosses the Andes Mountains, after a first visit to Chile, the rally will encounter a different face of South America: one that guarantees a broad range of terrains which smile primarily upon flexibility. In Argentina, the capacity to adapt will be vital to switch from one type of riding and driving to another and between different methods of managing the race. Although the ration of sand will be less dense, the visit to Gaucho country will nevertheless finish with a major test in which only genuine experts in desert riding and driving will be at ease.

Chile: A double and capital dose (4 stages and finish)

Two distinct sequences will be played out in Chile and each of them will be decisive. The return to the Atacama corresponds with the phase of the Dakar where competitors navigate in the domain of extreme endurance. As a challenge of ultimate resistance, the sessions in the dunes will continue up to the day before the finish. Before reaching Santiago, the competitors will have to tame difficulties of the highest order right up to the end.