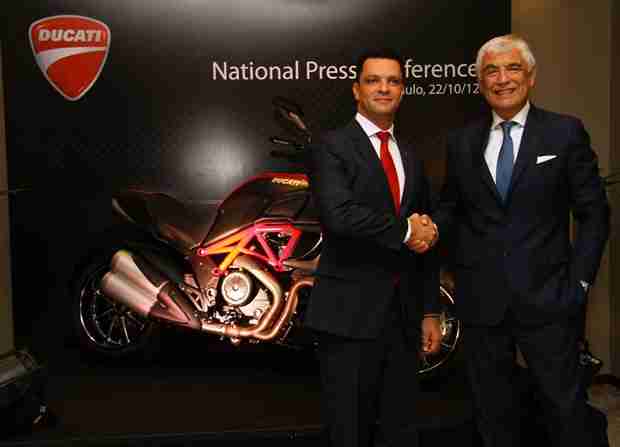 To further boost its growing success, Ducati has founded a subsidiary in Brazil, terminating its business relationship with the Izzo Group and starting “Ducati do Brasil IndÃºstria e ComÃ©rcio de Motocicletas Ltda.”. This will enable the company to fully manage the distribution of Ducati motorcycles and other Ducati-branded products in Brazil. Starting from October 2012, “Ducati do Brasil IndÃºstria e ComÃ©rcio de Motocicletas Ltda.” will manage the distribution and service Ducati products all over the national territory. Ducati Motor Holding S.p.A has full control of the new company and has appointed Ricardo Susini as its Managing Director and Marco Truzzi as Service & After Sales Manager. The new structure is based in Sao Paulo and, after completing all necessary formalities, will operate through an efficient sales network covering the entire Brazilian territory.

Ducati Motor Holding S.p.A. also confirms its cooperation with DAFRA da AmazÃ´nia IndÃºstria e ComÃ©rcio de Motocicletas Ltda. for CKD assembly of Ducati motorcycles in Brazil. Production at the Manaus plant will start within the next few weeks, with the first motorcycles delivered to a constantly growing and impressively evolving market. Ducati will carry out an increasingly important and strategic role in Brazil, confirming a positive growth trend world-wide, which has characterised this iconic manufacturer over the past few years.

“The Brazilian motorcycle market is one of the most interesting and the third biggest in the world,” said Gabriele Del Torchio, CEO of Ducati Motor Holding S.p.A. during the press conference announcing the creation of Ducati do Brasil. “Ducati has a very strong image in this country and we have the enthusiastic support of many Ducatisti, motorcyclists and fans in general. The opening of this new subsidiary and the fact that our motorcycles will be assembled in the Manaus plant is evidence of our focus on the Brazilian market. We wish to offer our customers here the best possible sale and after-sales service, and confirm the strategic importance assigned to this market by Ducati.”

“I am especially proud of having been selected for this great, new venture,” said Ricardo Susini, Managing Director of Ducati do Brasil. “I have spent my entire life in the world of motorcycling and now being part of such a prestigious, prominent and famous brand strongly motivates me to achieve new goals.”

Ducati Multistrada V4 spotted testing without camouflage: Launch is closer than ever before

The very first Ducati Superleggera V4, 001 of 500 has been delivered