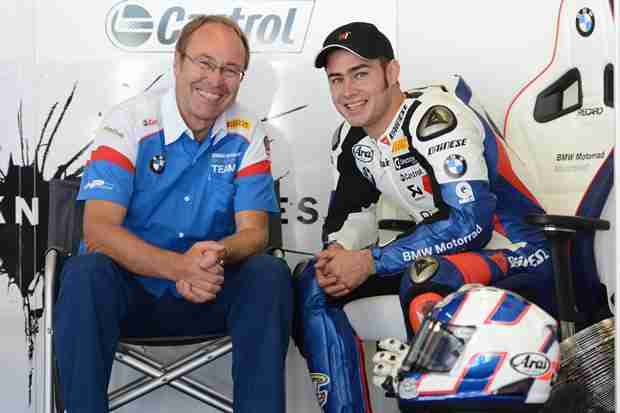 BMW Motorrad and factory rider Leon Haslam (GBR) will part ways at the end of 2012. Leon has been part of Team BMW Motorrad Motorsport since the end of 2010 and has made a valuable contribution to the successes of the German manufacturer in the FIM Superbike World Championship.

“We want to take the opportunity to say a big ‘Thank you’ to Leon. He is not only very fast and talented, but also a great fighter. He never gives up; we can see this often enough, when he defies even serious injuries, jumps on his BMW S 1000 RR and fights to give his very best for the whole team. We can always count on him 100 percent, on and off the race track. He joined our project when it was still young. And during the past two years he played a major part in bringing this project forward by always working hard on developing and improving the bike. BMW Motorrad would not be where it is now — fighting for the world championship — without Leon’s contribution. And Leon has a great personality; he is a real friend to all of us. We are very happy that we could work with him for the past two years and of course we will give him maximum support in the remaining races to enable him to get the successes he deserves. And we know that he also will continue to give his very best for BMW Motorrad until our ways part.”

“It is obviously very sad to saying goodbye after two great years at BMW Motorrad. It has been a tough uphill project but I have enjoyed it all the way. So I want to say thank you to everyone involved and hopefully we can finish strong in the last races for them so we can part ways on a high note.”