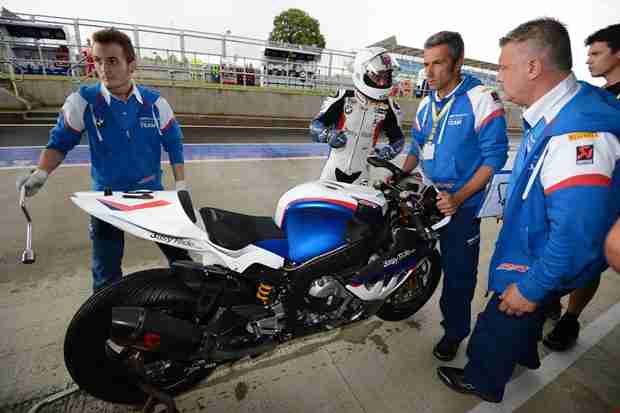 Team BMW Motorrad Motorsport is entering uncharted territory: This weekend (24th to 26th August), the FIM Superbike World Championship makes its debut in Russia. The new “Moscow Raceway” is the venue for the eleventh of the 14 rounds that make up the 2012 season. The circuit was opened in July and is located in Volokolamsk, about 80 kilometres west of Moscow. In order to acquaint themselves with the track, BMW Motorrad Motorsport and factory riders Marco Melandri (ITA) and Leon Haslam (GBR) will take part in the official Infront test at the “Moscow Raceway” on the Wednesday prior to the race weekend.

The team will celebrate an anniversary in Russia: the first race at the “Moscow Raceway” will also be the 100th race for BMW Motorrad Motorsport in the FIM Superbike World Championship. The goal for the weekend is to increase the lead at the top of the Manufacturers’ standings and close the gap in the Riders’ Championship.

“This will be my first time in Russia. I have never been there before, so it is going to be a new experience. It is a brand new circuit, but I know a little bit about it as I watched a car race on TV. The track looks good and very nice. There is a very slow section, a very long straight and long braking. It looks like it is going be very good fun and it seems to offer many overtaking opportunities.

We will use the test to learn the circuit and to start work on the set-up. We will be 100 per cent focused and work hard to make best use of the sessions on this new circuit ahead of Superpole and the races. Our goal is to challenge for the top positions again in Moscow and to get as many points as possible.”

“I have never been to Russia before and it is always exciting to visit new countries. It is a good addition to the championship; as a World Championship it is great to go to as many countries as possible. It is also exciting to race on a new circuit. We first have to learn the track, but we have a test there in the week leading up to the race, so I am looking forward to Russia. When you go to a new track, your pace is not so fast at first and you initially have to concentrate on your riding and getting used to the circuit without changing too much. As you get faster you can concentrate on the bike’s set-up. There are some circuits, which you get used to very quickly and the set-up of the bike is very similar to that used on the previous race weekend. However, some circuits are very unique and you need a totally different set-up and to ride the bike very differently. In Russia, we will know after the first few test sessions how much work we have to do.

We obviously want to push to win every weekend, and at Silverstone I felt that we were back to where we want to be. We had a front row start and were challenging for the race win. It went in the right direction; it was just another weekend of bad luck for me. We will keep pushing on and then luck will hopefully be back on my side.”