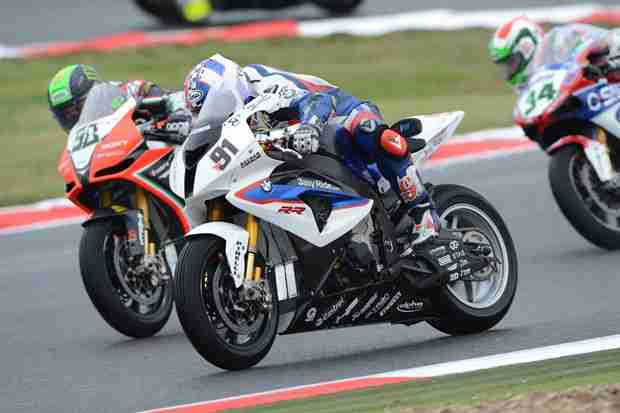 With last weekend’s races at Magny-Cours (FRA), the 2012 FIM Superbike World Championship came to a close. Now, after 14 exciting rounds in eleven countries, Team BMW Motorrad Motorsport can review the season with satisfaction. It was a year full of highlights and milestones. The targets set have been achieved, namely to close the gap to the teams at the very top and to challenge for the World Championship. The squad established itself within the leading teams and fought for both the Riders’ and the Manufacturers’ title to the very last race.

Factory riders Marco Melandri (ITA) and Leon Haslam (GBR) claimed six victories, in total 16 podium finishes and five fastest race laps on their BMW S 1000 RRs, thus making it the team’s most successful ever season in the Superbike World Championship. In the Riders’ Championship, Marco finished the season in third overall claiming the best ever result for a BMW rider in this category. His gap to title winner Max Biaggi (ITA) was 29 points in the end. In the Manufacturers’ Championship, Team BMW Motorrad Motorsport and the BMW Motorrad Italia GoldBet SBK Team with riders Michel Fabrizio and Ayrton Badovini (both ITA) secured second overall for BMW Motorrad, 23.5 points behind winner Aprilia. This is the best ever result for the German manufacturer in the series.

In the following races, Team BMW Motorrad Motorsport continued its way up, claiming more wins and podiums. The next highlight was the Czech round at Brno in July. For the first time ever BMW Motorrad took the lead in the Manufacturers’ classification of the Superbike World Championship, and also for the first time BMW Motorrad won both races of a World Championship weekend with Marco riding his RR to victory in both heats. Two rounds later, at the series’ Russian debut at Moscow, Marco took the lead in the Riders’ championship by claiming his sixth win of the season. It was another milestone as Marco was the first BMW rider to top that classification.

The season entered its exciting final stretch with BMW Motorrad leading in both standings but racing not only offers highlights but also setbacks, a fact that the team had to experience. Two difficult race days with crashes and issues at NÃ¼rburging (GER) and PortimÃ£o (POR) cost the lead in the classifications. Nevertheless the whole squad stayed focused and determined to end the season on a high at the finale at Magny-Cours. This will to succeed was rewarded by another second place on the podium for Marco, who rode with two broken ribs.

“It has been a great year, with so many moments of joy”, reflects BMW Motorrad Motorsport Director Bernhard Gobmeier. “When we headed to Australia for the first round in February, we hoped that the hard work and development done over winter with the then new RR would pay off in the form of top results. Looking back now, I have to admit that the successes in a way even exceeded our expectations. Our target was to further improve step by step, to win races and to challenge for the title. To celebrate six victories and so many podium finishes is a dream come true for everyone at BMW Motorrad. Of course we not only experienced joy but also setbacks but we never gave up. Even in difficult times, every single member of the team stayed focused and worked even harder in order to return to winning ways. This commitment was one of the keys to our success. A big ‘thank you’ to the whole BMW Motorrad family – to the two factory riders, Marco and Leon, and their crews, to everybody who worked so hard at the race track and behind the scenes at Munich and Stephanskirchen. Thank you also to the BMW Motorrad Italia Goldbet SBK Team with riders Michel and Ayrton, who also scored important points for the Manufacturers’ Championship. Every single member of the staff played his vital role that made this the best ever season for BMW Motorrad in World Superbikes possible.”