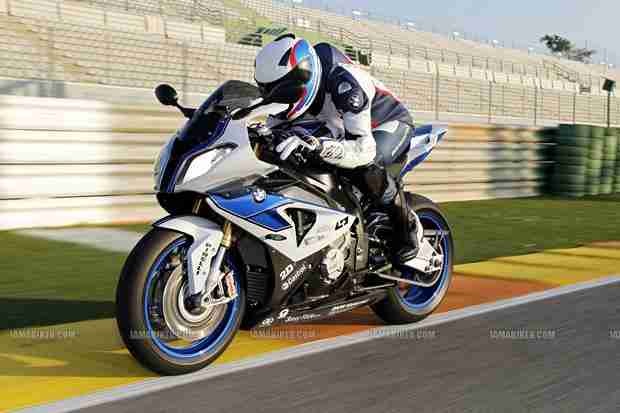 We told you about the upcoming BMW S1000RR HP4 last week and finally now we have official word from BMW Motorrad about the motorcycle. With the BMW HP4, BMW Motorrad presents the lightest 4-cylinder supersports bike in the 1000cc class to date. Based on the BMW S 1000 RR – or RR for short – the new sports motorcycle has an output of 142 kW (193 hp) and weighs just 199 kilos including Race ABS and with a 90% full fuel tank (169 kg dry weight with Race ABS).

The new BMW HP4 sees its world premiere in 2012 and is a continuation of BMW Motorrad’s HP model series founded in 2005. After the boxer models HP2 Enduro, HP2 Megamoto and HP2 Sport, the BMW HP4 is the first 4-cylinder motorcycle in the HP family. The HP label stands for high performance, and the HP4 once again embodies outstanding agility, power and riding dynamics. But it also reflects the use of extremely high-quality materials and intelligent technology, carefully conceived down to the last detail. In short, the HP4 stands for perfectly controllable power and sporty perfection.

BMW High Performance motorcycles are truly outstanding: exclusive and authentic, they will always remain relatively rare. This applies equally to the new BMW HP4. Each motorcycle is issued with its own HP4 serial number which is engraved indelibly in the upper fork bridge.

A genuine highlight: due to its extensive range of fittings and excellent set-up, the new HP4 is immediately ready for use on the race track ex works, requiring no elaborate modifications. But at the same time it offers great potential for dynamic riding on country roads. Still, the HP4 is entirely uncompromising, combining athletic flair and riding dynamics at the very highest level – to an even greater extent than the S 1000 RR.

Since its international press presentation in autumn 2009, the S 1000 RR has sped from one triumph to the next – and not just in motorcycle magazine comparative tests. This is clear evidence of the qualities and the consistency of the supersports concept. Fitted with Race ABS and Dynamic Traction Control (DTC), the RR set a new benchmark in this hotly competed and technologically highly sophisticated segment. But even the S 1000 RR left some room for improvement.

The HP4 provides the homologation basis for the use of BMW motorcycles in motorcycle racing, especially in the superbike and superstock category. The new model features numerous technological innovations which highlight its orientation towards racing and the race track. The standard passenger seat cover ensures the monoposto look so characteristic of the race track. But for riders who would like to travel with a passenger, BMW Motorrad also offers a passenger package as an ex works option. In addition to the passenger seat this includes the passenger footrest system.

The new HP4 reflects its status as a high-performance motorcycle in terms of its suspension system with a world first for serial production motorcycles: it is fitted as standard with Dynamic Damping Control DDC. This system allows dynamic damping adaptation of the upside-down fork and spring strut to the specific situation on the road. The damping is adapted to the current manoeuvre or road surface by means of sensor-supplied parameters via electrically controlled regulation valves. In this way, the HP4 offers optimum damping in every situation, handling long and short shocks virtually perfectly so as to provide maximum traction and safety.

With the introduction of Race ABS in the S 1000 RR, BMW Motorrad underscored its pioneering role in the area of ABS. For the first time ever, an antilock brake system was consistently tailored to sporty needs.

With the new race-oriented HP4, BMW Motorrad now takes the next step in this area. In keeping with the HP4 use profile of race track and dynamic country road riding, the new bike not only has Brembo monoblock brake calipers and 9x floating brake discs at the front but also a further developed and refined Race ABS.

As before, this ABS has four different modes for wet surfaces (“Rain”), roads (“Sport”), race track with supersports tyres (“Race”) and race track with slicks (“Slick”). Racing experience gained from the IDM (International German Motorcycle Championship) has been fed directly into the Race ABS fitted in the HP4. In “Slick” mode, the so-called IDM setting with refined regulation impulses now gives the skilled rider the option of maximum possible deceleration.

The HP4 uses a rear tyre in the new format 200/55 ZR 17. The Dynamic Traction Control DTC already used in the RR has been optimized for supersports use in the HP4: now the effect of traction control can be adapted in “Slick” mode to changing conditions and the rider’s individual preference while on the move.

The HP4 is the first BMW motorcycle to have a so-called Launch Control function which provides active support for the rider in “Slick” mode to achieve maximum acceleration from standing – for example on race starts. Launch Control limits engine torque so as to provide the maximum torque transferable from the rear wheel whenever the front wheel is under no throttle. This means the rider has to focus less on the throttle because he is controlling acceleration solely using the clutch. In addition, when Launch Control is activated engine torque is reduced as soon as the system detects front wheel lift. This prevents unwanted wheelies when accelerating.

The HP4 allows the rider to make instant gearshifts with virtually no interruption of tractive force by means of the shift assistant, fitted as standard. This helps gain valuable fractions of a second on the race track, too.

New finely wrought 7-spoke wheels in forged light alloy and a new, lighter sprocket carrier give the HP4 a weight reduction of 2.4 kg as compared to the RR.

The exhaust system is made entirely of titanium and saves as much as 4.5 kilograms as compared to the RR, thereby contributing to the HP4’s enhanced handling qualities. The new exhaust system has an interference pipe between cylinders two and three, a controlled acoustic valve and a closed-loop catalytic converter. It has been possible to optimise the torque curve thanks to the new exhaust system, with the engine application adapted accordingly.

Sharpened engine set-up and more torque in the mid-range.

The HP4 has numerous special features to meet the needs of sports and racing riders. For example, the instrument cluster not only has a newly designed dial face with HP4 inscription but also provides an extended range
of information and functions. The information display now shows the
DDC set-up menus as well as the figures for DTC fine adjustment and
Launch Control activation.

In visual terms, too, the new HP4 is consistently in line with supersports aspirations for the race track and for dynamic country road riding. In addition to the monoposto look there is a dual-section engine spoiler – elongated as compared to the RR – and a tinted windshield, both of which highlight the increased dynamic performance of the HP4. The small, light LED turn indicators are discreetly integrated and the laser-engraved HP4 logo with serial number on the upper fork bridge underscores the bike’s exclusive character. An elaborate multiple colour paint finish in Racing blue metallic/Light white creates an appropriate racing-oriented appearance.

HP4 with Competition Package — top-level exclusive flair due to use of the very finest materials.

For anyone who wants even more than the functional sophistication and extreme riding dynamics of the HP4, the HP4 with Competition Package is an especially exclusive version of the motorcycle. Refined HP carbon parts including a long, closed HP engine spoiler in carbon, an adjustable HP rider footrest system, folding HP brake and clutch levers, wheels finished in
Racing blue metallic and a sponsor sticker kit provide additional enhancement of the new HP4. 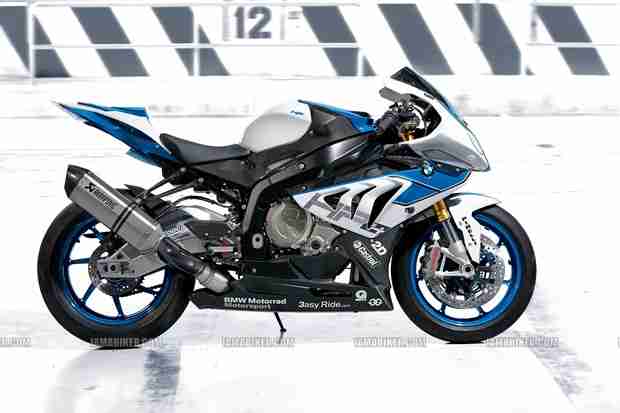 A summary of the HP4 technical highlights:

Click here for more photographs of the BMW S1000RR HP4