Italian adventurer Davide Biga is about to make it back home after one year spent circumnavigating the world alone on his Yamaha Super TÃ©nÃ©rÃ© 1200. The 90,000 km ride required seven sets of tyres and eight oil changes, but from a mechanical point of view it passed off without a hitch, and today the Italian biker will be welcomed back home by family and friends in MondovÃ¬, northern Italy.

He started his adventure last May 2011 and it lasted just above 11 months. You might be thinking, where does this guy find all this time? You are right, as he says himself, he is lucky! But he also claims that his luck is due to his passion for two-wheelers.

He has already ridden a number of motorbike trips of which the most interesting are:

During his trip Biga visited 31 countries in 4 different continents: from Italy he moved to the North Cape in Norway, and from there he went to Moscow, where he then followed the Trans-Siberian Railway to get to Vladivostok. Next stop was Japan, where Biga also paid visit to the Yamaha Motor Company head-quarters in Iwata. Then it was Alaska’s turn, and from there he went all the way down to Chilean Patagonia. A little cruise across the ocean to Senegal’s capital Dakar (surely not a random choice), and from there he crossed the whole Maghreb region to get back to the Mediterranean Sea.

The celebrations for the homecoming hero will be held at the local Yamaha dealership, Many riders would be joining him for the last leg of the journey and will meet up with him a few kilometers away before the dealership where Biga will make his last stop.

Check out the gallery below for some exclusive photographs from Davide Biga’s ride. 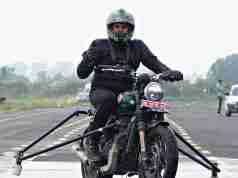