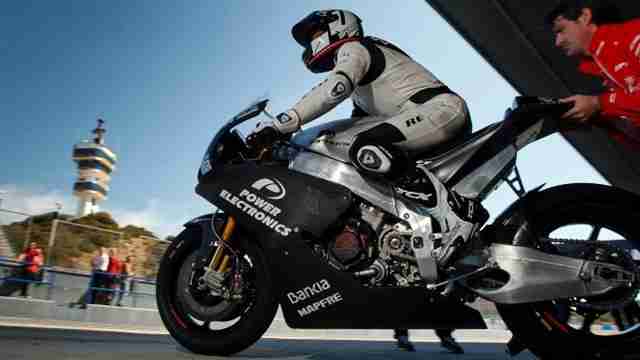 Today’s final day of testing for the four CRT teams at Aragon was hindered by cold air and track temperatures and some wind and the only lap times reported were for Avintia Racing riders Ivan Silva and Yonny Hernandez who did there best laps during the afternoon session. Silva’s best lap was 1’53.373 while Hernandez posted a best time of 1’53.588 which would have placed them a little more four seconds off pace from last year’s best lap set by Casey Stoner (1’49.046) but in completely different weather conditions.

Power Electronics Aspar team, who revealed this new livery yesterday, had trouble getting their Bridgestone tires up to temperature during the morning session and in the afternoon session did a few laps with Randy dePuniet and Aleix Espagaro not risking taking their ART bikes to the limit, so the day was a more or less another washout. James Ellison preferred to sit out the afternoon session after being caught out by cold track temperatures that caused him to highside, fortunately the PBM rider was unhurt. The last official pre-season MotoGP test will be held at Jerez starting March 23rd.