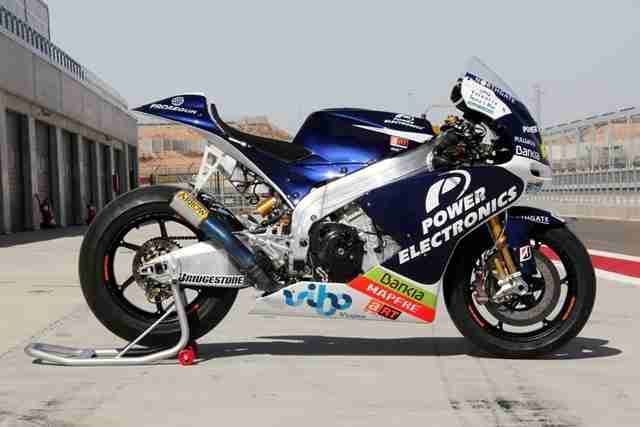 One of the biggest compliments ever made regarding the Aprilia RSV4 was actual meant to be a criticism, as when it came time to homologate the RSV4 for World Superbike racing, the competition cried afoul – saying the RSV4 Factory was really a MotoGP bike in a production bike’s clothing. Said to be the leftovers from Aprilia’s aborted MotoGP effort, the Aprilia RSV4 had a meteoric rise in WSBK, and won the Championship after only the company’s second season back in the series.

It should come then with little surprise that the Aprilia and its V4 motor have been the popular choice for teams in the MotoGP Championship looking for a claiming-rule team (CRT) solution. Dubbed the ART, the Aprilia-powered CRT bike also features an aluminum chassis that is designed by the Italian company. Thus with Aprilia offering essentially a turn-key GP solution for teams like Aspar Racing, it probably shouldn’t shock us that the similarities between the production WSBK-spec RSV4 and prototype ART being almost too close to distinguish between the two, even down to the bodywork.

Given the fact that Dorna desperately needs an alternative to prototype racing machines built by Ducati, Honda, and Yamaha for its CRT gamble to work – not to mention the need for CRT bikes and teams that are competitive on the track with the bikes from the OEMs – one can only imagine that Dorna is turning a blind eye to obvious “bending of the rules” that is occurring with the ART project. If the ends justify the means, then surely none of this matters to Ezpeleta et al, and right now Randy de Puniet and the Aspar Racing team’s CRT effort are the MotoGP rights holder’s best bet at recapturing control of MotoGP racing.

That all being said, the Power Electronics Aspar team debuted its ART race bike, and as is the custom, disclosed only some of the most basic technical specifications about the machine. At the helm of Aspar’s ARTs will be Randy de Puniet and Aleix Espargaro, and while the CRTs as a whole have been off the pace of the prototype bikes, RdP’s pace on the Aprilia has been noticeably quicker, and could give some of the slower satellite riders a run for their money. Technical details and photos are after the jump.

Though sparse of an real details, an interesting figure of note is the ARTs 165kg dry weight, which is noticeably heavier than the 157kg MotoGP minimum. This gives some further credence to why the minimum weight limit was raised in MotoGP, and also shows some areas of improvement that Aprilia can make to its racing package.

Technical Specifications of the ART