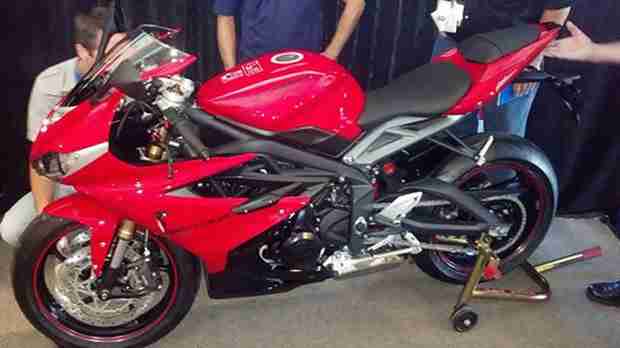 The all new Triumph Daytona 675 for 2013 has been in the news for quite some time now, just last month we got confirmed news that we can finally see that bike at the upcoming EICMA in November and since then Triumph seems to be churning out special editions and special paints jobs on the existing Daytona 675 in what seems to be a push to clear stocks and make space for the new 2013 Triumph Daytona 675.

Today though had a pleasant surprise for all the Daytona fans out there. Photographs of the new Daytona have emerged on the internet and better news is that there seems to be a lot of change. The photograph shows that the motorcycle gets a new chassis, an under belly exhaust system and minor cosmetic design changes. The new chassis and the under belly exhaust mean that the new Daytona will have better weight centralization and possibly a lighter overall weight. Now we will know the final specifications only at Milan next week but most likely the engine specifications will be the same.