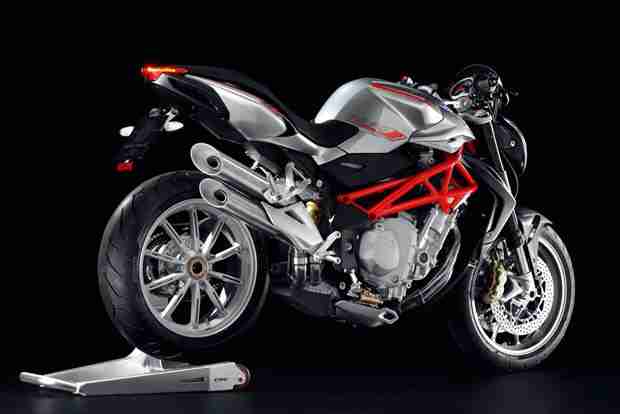 The folks at MV Agusta had launched a teaser video last week to announce the four cylinder Brutale line up and now have unveiled the complete details on the three models of the Brutale for 2013.

The three models are namely the MV Agusta Brutale 1090, Brutale 1090R and the Brutale 1090RR. All the 3 models feature an eight level traction control, a tubular steel trellis frame, a single sided exhaust, ten spoke wheels, 50mm USD forks, six speed transmission and radial-mount Brembo calipers. All the 3 models feature the same 1078cc four cylinder engine and to add to the options MV Agusta is offering the 1090 and the 1090R also with a 142bhp engine option. The 1090RR version gets a more powerful 156bhp engine, a adjustable hydraulic compression damping and a slipper clutch.

The entire line is equipped with dual front brake discs. The 1090 and 1090R use 310mm discs while the RR uses a 320mm disc while adding monobloc calipers. Apart from the these changes the 2013 versions get small design changes and slight weight reduction.