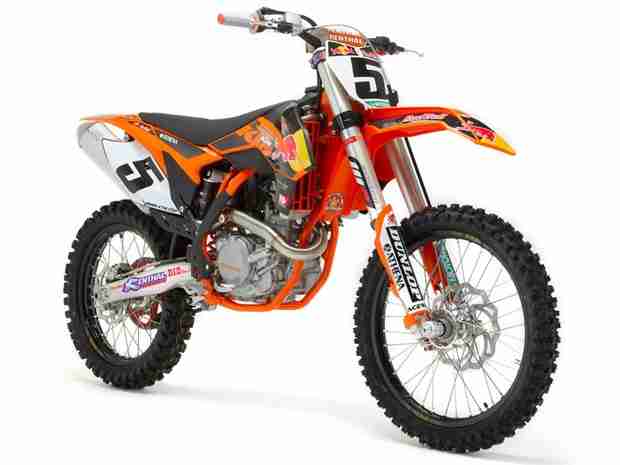 KTM have taken the wraps off the new 2013 450 SX-F Factory Edition just a couple of weeks ahead of the AMA Supercross Championship scheduled to happen on January 5, 2013 at California. Last years factory model was well received and the blokes at KTM have been working overtime to make sure that this new version is even more exciting.

The 2013 450 SX-F Factory Edition is based on the 450cc fuel injected single cylinder that gets a lot of tweaks to make it more competitive for the demanding sport of motocross. The majority of the changes are chassis related and a lot of tweaks have been made to make it more dependable on duty. A bright orange powder-coating on the frame, orange radiator and engine protectors, a Salle de Valle custom seat, anodized triple clamps and rear sprocket, both in orange, a Regina racing chain and a Akrapovic titanium factory exhaust. Apart from these an engine mapping switch has been provided to switch maps depending in terrain and conditions. More photographs of the 2013 KTM 450 SX-F Factory Edition below.