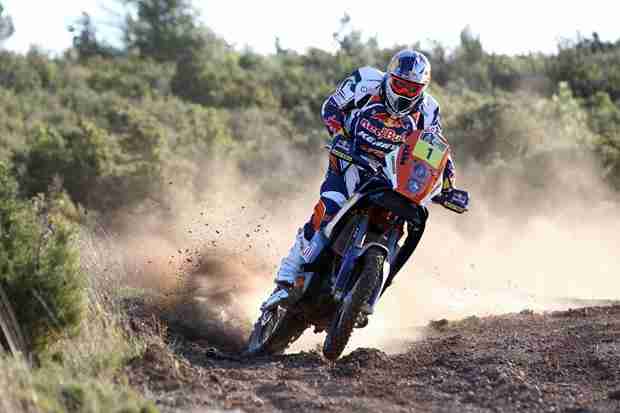 The 2013 Dakar Rally is just a couple of days away from flag off and the challenge begins on January 5th at Lima, Peru. The rally which began its life in the African continent now is a regular at the more varied terrain of South America. The main challengers for the Dakar Champion in the motorcycle category are top manufacturers KTM and the recently returned Honda.

With Marc Coma out of contention with a shoulder injury Frenchman Cyril Despres becomes the obvious favourite for the win as he and his injured team mate have won the last seven editions of the Dakar. As specified by the KTM team manager Dorringer, Coma’s replacement Caselli will be able to race without any pressure on him to achieve a top position. The American will be supported by the two regular “water carriers” of the KTM Rally team, Ruben Faria of Portugal and Juan Pedrero of Spain. This year KTM is also fielding a Factory “B” Team made up of South African duo Darryl Curtis and Riaan van Niekerk, who are joined by Poland’s rising rally star Jakub ‘Kuba’ Przygonski.

However, the KTM guys will have to face quite some serious competition this year, starting with the resurrected Honda HRC Factory team, that will return to the Dakar after a 23 years-long absence. The official team of the Japanese giant also had to deal with two last minute defections due to injury (Brazilian Felipe Zanol and British Sam Sunderland) and will therefore field a line-up of three riders: Portuguese Helder Rodrigues, Argentinian Javier Pizzolito and American Johnny Campbell, all of whom will have the tough job of bringing the brand new CRF450 Rally to success in the most harsh and demanding competition out there.

Another team with high and justified hopes of success at the Dakar is the Husqvarna Rallye Team by Speedbrain, the official factory team of Italian-German-Swedish brand that will field four TE449RR entrusted to Joan Barreda of Spain (who was the winner of the recent Rally of the Pharaohs and finished in second place in the Rally of Morocco), Paulo Goncalves of Portugal, Botturi Alexander of Italy (best rookie of the 2012 Dakar) and Matt Fish of Australia. As for the outsideres we suggest you keep an eye on San Marino-born rider Alex Zanotti, 2012 World Champion of the Baja 450, who will compete with the TM Rally 450 of the official TM Racing team.

The rally was moved to South America when the 2008 edition was canceled after terrorist threats in North Africa emerged the night before competitors were to set out from Portugal. Now for the first time the South American Dakar will take a north-south perspective over the 14 stages, starting in Lima, Peru and traveling south to finish in Santiago, Chile, taking in four stages in Argentina on the way. Riders set out on January 5 and finish on January 19 with one rest day scheduled on January 13. They will first tackle the coastal desert of southern Peru and according to organizers will be under constant pressure for the eight stages up until the rest day. Stage nine will be the longest of 2013, some 852 km.