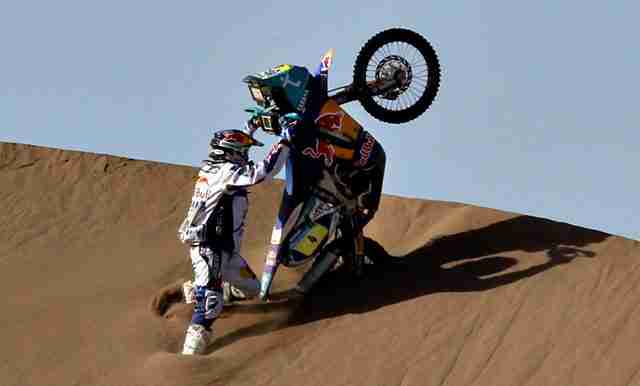 The months and weeks of preparation for some of the bravest off-road riders in the world will shortly come to a head when the 34th Dakar Rally sets off from Buenos Aires for the 9000km two week race, regularly dubbed as one of the toughest in the world. Yamaha will count on a fine representation of 40 riders from the 188 entrants of the motorcycle class and over half of the 32-strong Quad category once the clock starts on New Years day.

The bike division has now clearly been fixed at a 450cc capacity that will allow the potential of the WR450F and YZ450F Rally machinery to come into its own. One of the brightest hopes on two wheels will be Helder Rodrigues. The 2011 FIM Cross Country Rallies Champion broke into the top three for the first time last January and also won a stage; his fourth success from the last four attempts. The Portuguese is gathering form and experience of the Dakar and hasn’t dropped out of the top five in four of the five editions he has now contested. His success in the FIM series will be well noted among his rally rivals, many of whom were part of the four round campaign this year and know that the 32 year old cannot be discounted from a realistic shot of overall victory. “My objective is to finish even better,” he said to the official Dakar website. “Like last year I worked all season to improve. This year’s route should allow me to show that I know how to take on the pitfalls and complexities of the rally.”

Other notable riders include several Frenchmen. Enduro special Olivier Pain conquered a stage of the ’11 incarnation but was then unlucky to be ruled out through injury approaching the halfway point when he crashed and broke his left wrist. He classified ninth in 2010 and at the age of 29 is one of the younger competitors in the crop. Countryman David Casteu was a Dakar vice champion in 2007 and now joins the Yamaha Motor France-backed team alongside Pain with serious goals on his eighth run at the rally before a look towards the four-wheel category in the coming years. “It means a lot to me to ride for Yamaha,” he told www.dakar.com. “It is a constructor with a soul and a history on the Dakar. I am part of the generation that was spellbound by Peterhansel’s wins on a Yamaha. Now, what I wish is to end my career as a rider with Yamaha and then create projects for the next generation. Today, our goal is to win the Dakar. Rodrigues rides for Yamaha Portugal and at Yamaha France we have two lead riders, Olivier Pain and myself. The bike has made progress compared to last year and for my part I will make a few changes to my strategy. I will set off a little slower and ride with a ‘wait and see’ approach.”

Outside of a strong French line-up another rider to watch will be Jonah Street, who will again be steering WR450Fs from the confines of his own team for the second year in succession. The American suffered an inconsistent rally in 2011 but his victory in stage nine was the undoubted highlight. He classified 12th in January but is now hoping to reach the same level of performance that guided him to seventh place overall in 2010.

While Yamaha will look on with relish at the competition among the bikes, they can feel highly confident when it comes to the Quads; now fixed with a 750cc limit for the engines. Argentina boasts a plethora of extremely capable drivers in this discipline and at the top of the tree are the Patronelli brothers, Marcos and Alejandro, who have claimed the last two Dakars between them on their Yamaha YFM700Rs. It was the latter, Alejandro, who grasped the crown while nursing a hand injury this year as 2010 winner Marcos had to retire with physical problems. The older sibling (Alejandro) has notched seven stage victories in two years and the pair has yet to classify outside of the top two in their attempts at the Dakar. Following the Patronellis’ is fellow countryman Tomas Maffei, also Yamaha Raptor mounted, and a stage conqueror back in January. Another stage victor from the previous Dakar is Czech veteran Josef Machacek, who will also roll into the Argentine capital. Among the Women’s competition FIM Cross Country Rallies World Champion Camelia Liparoti will be aiming to better her previous finish of 10th. Yamaha owned eleven of the thirteen 2011 Quad stages with five different riders; anything approaching the same level of achievement will be outstanding.

The 2012 Dakar will involve two extra days of racing — now fourteen — as the bikes, quads, cars and trucks, plough a course from the Atlantic ocean on one side of the continent to the Pacific on the other. The diverse terrain of the Andes and the Atacama Desert now with a trip into the heart of Peru awaits; mountain paths, canyons and forestry will turn to dunes and beach backdrops. Endurance, resistance, mechanical guile and navigational skill are just some of the characteristics that will prove vital.