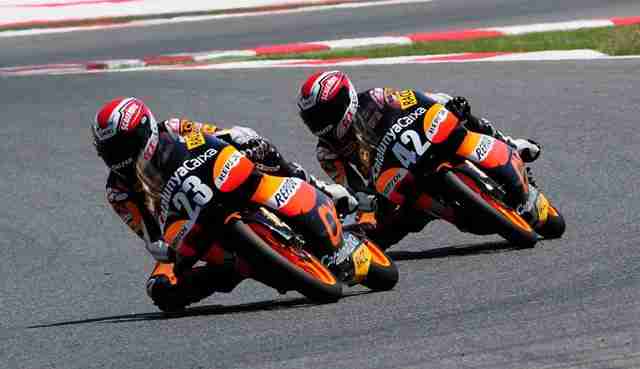 Repsol, with more than 40 years of experience in sporting sponsorship, will face the 2012 season with the aim to win in all classes of the Motorcycling World Championship. The energy group, which conquered the 2011 MotoGP Championship with Australian rider Casey Stoner and finished in runner-up position in Moto2 thanks to Marc MÃ¡rquez, will increase in 2012 its presence in the most important motorcycling competition in the new Moto3 category, with a line-up that includes Spaniard Ãlex Rins and Portuguese Miguel Oliveira.

16-year-old Ãlex Rins, is the latest jewel of the Spanish young riders and will debut in the Motorcycling World Championship as the current Spanish Champion (CEV) in the 125cc class. Miguel Oliveira, also a 16-year-old, is one of the most promising riders of the international scene, as he has already a year of experience in the class and won the last two races of the CEV with a Moto3 of the Monlau CompeticiÃ³n Team.

Repsol will have in 2012 the most powerful team of the Motorcycling World Championship and aims to win in all classes with the riders Casey Stoner, Dani Pedrosa (MotoGP), Marc MÃ¡rquez (Moto2), Ãlex Rins and Miguel Oliveira (Moto3). Since its debut in the Championship, 40 years ago, Repsol has won 27 titles in the different classes (50, 80, 125, 250, 500cc and MotoGP).

Despite having already some of the best riders of the grid, Repsol has not yet closed the team for the 2012 season. The company is the official fuel and lubricant supplier of the Repsol Honda Team, in MotoGP. In its Technology Centre, located in MÃ³stoles (Madrid), the energy group develops fuels specific for high-level competition.