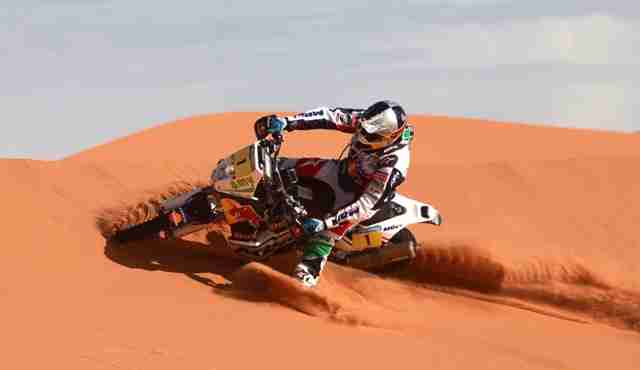 Argentina, Chile and Peru. Those are the countries that will see the pass of the Dakar caravan through their landscapes and deserts in the edition that will start next Sunday, January 1st, 2012. In the motorcycles category, a name stands out above all the others, Marc Coma. The Repsol rider, three times winner of the Dakar, travels to South America with a clear aim: to achieve in Lima his second consecutive bronze touareg.

The road to the Peruvian capital will be long an difficult. A diagonal of nearly 9.000 kilometres, from the Atlantic to the Pacific coast, will challenge the participants that dare face the toughest rally on earth. All that from next January 1st, starting from the Argentinean city of Mar del Plata, where Marc Coma arrives after participating in nine editions and with the aim to celebrate his tenth Dakar with the second consecutive title, a feat that he has not yet been able to achieve.

Here is what Marc Coma had to say,

“Truth is I have very good feelings and I am in full physical form. We expect a tough and demanding rally, where experience will be a key factor. Although we have to be focused from the first day, the stages in Atacama and Peru can decide the race.

I don’t feel pressure, so I simply face the race with the same strength and determination. I will compete as always and then we will see what we can do. To win again will undoubtedly be the best reward, as there have been some years that a winner does not repeat victory, but we have to do it step by step”.

Considered the most African edition of the three held in South America, 14 stages –4,406 timed kilometres– in 15 days await the Repsol rider and his KTM 450 Rally. Only one rest day in CopiapÃ³, will allow the riders to take a break before facing the second part of the race, that for this year will have new and more strict rules, with heavy penalties for engine changes. For this challenge, his nine years of experience in the rally and the support of his team mate Joan Pedrero, place him once again as the main rival to beat.

With four World Championships and three Dakar titles, Marc Coma already is the most successful Spanish rider of the history of this category. Nevertheless, the desire to win does not disappear. The Repsol rider wants to be, next January 15th, the first participant of this historical rally to raise the bronze touareg in Peru’s capital city , Lima.