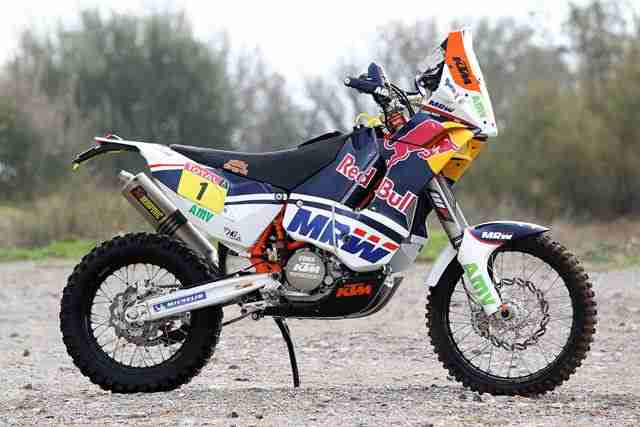 Heir of the KTM 690 Rally with which Marc Coma won the Dakar two times and became Cross Country Rally World Champion in four occasions, the KTM 450 Rally that made its debut at the Dakar a year ago. It did not disappoint and, after a faultless race, became one with the MRW rider and became the first Dakar winner with engines limited to 450cc.

It will be the second year for the Austrian bike, which in the last twelve months has had its teething problems fixed and now ready to face its second Dakar with higher technical reliability. During the fifteen days of the Dakar, Marc Coma will ride on this new queen of the desert, a more mature bike that will face one more race this year. The one-cylinder, 4-stroke, 449cc engine has improved reliability to face the new requirements of the race, which this year will penalize engine changes. Its position is also another of its main feature, as it is placed beneath the frame, fixed with two metal arms, making it considerably easier to assemble and disassemble, something crucial in a race like the Dakar, with so many consecutive days and a high wear rate both for machines, rider and mechanics.

Designed specifically to be ridden both on the toughest deserts in the world as well as in the technical and broken tracks of the Dakar, the KTM 450 Rally is a bulky but nimble bike. The weight reduction from its 690cc sibling allowed for an improvement in manoeuvrability which, combined with its predecessor’s trellis frame structure give it a great stability at high speed, able to absorb the changes in the terrain and send the feedback to the rider.

Another essential feature for the Dakar of the KTM jewel is the capacity of its three tanks –two in the front, one in the centre– which can hold approximately 35 litres of fuel. Distributed in a balanced way, they give Coma the required range for the Dakar. There is also space for a tank with two liters of drinking water. A feature required by the organizers, it helps the rider hydrate in case he needs help and would have to wait a long time. At the side of this tank, there is space for basic tools.

Some months before the start of the 2011 Dakar it was announced that the engines of the motorcycles would be limited to 450cc, the constructors started a race to design and prepare a winning bike for the start in Buenos Aires. With the same DNA as the desert queen and a godfather as Marc Coma to develop it, the Austrian brand placed in the tracks and deserts of Argentina and Chile a bike that was able to fill the shoes of its predecessor and beat its rivals. For the MRW rider and his KTM 450 Rally, the time has come to face again the Dakar challenge.

Here is a look at the technical specifications: 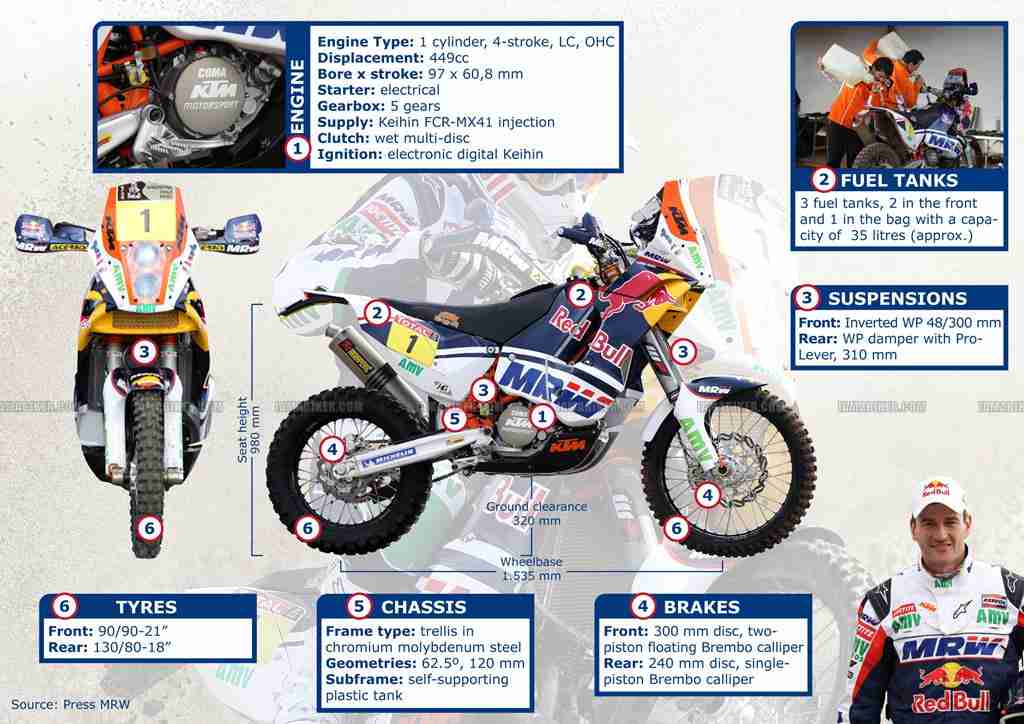