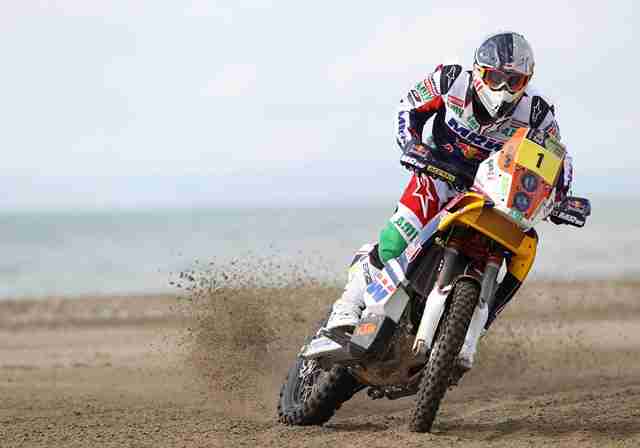 The three times winner of the Dakar, Marc Coma, put himself forward this morning at the MRW Headquarters in Barcelona to try and achieve victory again at the toughest rally in the world. Spearheading the MRW Red Bull AMV Team, the rider from AviÃ , together with Joan Pedrero, his team mate for the second consecutive year, commented his preparations of the 2012 Dakar in a working breakfast with the media. The Start in the Atlantic coast and the Finish in the Pacific coast will be one of the novelties of the 2012 Dakar that Marc Coma analyzed this morning in Barcelona. The current winner of the rally will start next January 1st from Argentina towards Peru following a route of nearly 9000 kilometers –half of them timed– that will cross South America. In its fourth edition in that continent, this year’s race will have 14 stages and just one rest day in Chile. The MRW rider will have the help of the best possible squire, Joan Pedrero –fifth in the 2011 overall classification–, who will keep the role of assistant of the most successful Spanish rider in this rally.

Marc Coma and Joan Pedrero will wear MRW’s livery for the second year. During this whole year Marc has been “the best messenger” of the courier company and now it is time for him to do it again in the most important race of the calendar. Marc Coma and the Dakar embody many of the MRW brand values: strategy, reliability, demanding, team work, commitment to innovation, proximity, responsibility… After the official launch of the MRW Red Bull AMV Team, Marc Coma will travel to South America for his tenth participation in the race and, together with Joan Pedrero, determinedto get his fourth bronze touareg. 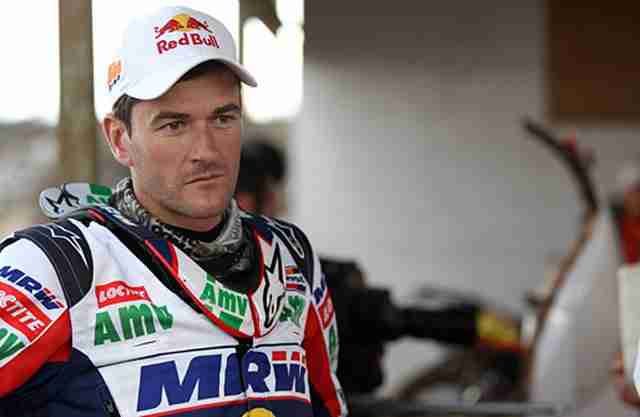 What do you expect in this 2012 Dakar edition?

“I think this year will be the most African edition since the race change continent. What we were able to see shows that it changes to be a linear race with Finish in Lima, Peru’s capital. It seems that until the last day the scenery we will have will be the desert, very similar to what we remember from the African race”.

To face a race like the Dakar, how important is it to be in a team like the MRW Red Bull AMV Team?
“After a first edition with Joan [Pedrero], where we did a great team work, I think it is the moment to confirm it. Last year we achieved a great victory and we hope we can repeat it. It is difficult, but with the help of the team and a good set-up for the bike, we have chances to repeat that victory”.

This will be your tenth Dakar. How has ‘Marc Coma’ evolved as a rider during these years?
“Ten years are a lot of time. They pass very fast, but they are a lot of time. Both as a person and as athlete I have been progressing and growing and now I have a lot more experience. I think we are in a good moment and now is time to gather the fruits of all these years”.

Will you train again with the bike before the start of the Dakar?
“That depends a bit on the weather, if the conditions are favourable we will take advantage of them, but the work is mostly finished. The aim is not to lose the physical level and that the bike mechanisms are active”.

Why do you prepare the Dakar in Morocco?
“Morocco is the ideal place to train because we can simulate all the conditions we will find in the Dakar. It also allows us to do many kilometres of desert, it is relatively close and the weather is much better than in Spain at this time of the year. The most important point is that there are also dunes, a terrain impossible to find in Spain. We are just a month away from the Dakar and in Spain is difficult to train because the weather conditions are more complicated. It is a time we always go there because we are calmed and can focus on the training. There are many kilometres of desert and dunes where we try to find all the terrains we must face in South America”.

Have you got any memories from this place?
“The first time I saw and rode on dunes was here, in Merzouga. It used to be a mythical part of the Dakar route. It is a place where it used to be a lot of public. A very special place with an amazing scenery, so it is nice to come back and train in that area of Morocco”.

As all the great riders, Marc Coma has fuel running through his veins. When he was 8 he already run from his house to the mountain tracks around AviÃ  (Barcelona), something his father and his uncle, two great motorcycle fans, were soon used to see. The little kid would disappear on a Montesa Cota 348, until he had the first bike of his own: a Puch Cobra 74, which was a reward for his good marks at school.

It was in 1995 when the rider from AviÃ  started to compete in national and world enduro championship, which were his first contact with competition. Nevertheless, Marc had really just one fixed aim: the Dakar. That race where the African desert was the only scenery obsessed the Spanish rider.

The beginning was hard, but after the good level shown in his debut in 2002, Coma entered a year later the KTM team together with Nani Roma and Isidre Esteve. That year he achieved his first objective, to finish the tough African race with a well-deserved eleventh place. The following year, Coma repeated his role as squire in the team that would eventually win, until he had to retire due to a crash.

He struck his first blow in 2005, when he finished second in the overall classification, and it was on Sunday, January 15th 2006 when Marc Coma finally reached the top of the podium in Lac Rose. He became the second Spanish rider to achieve that feat, a great success that confirmed him in the elite of the specialty when he also became Cross-Country Rallies World Champion.

Nevertheless, that success was followed by two disappointments that he was able to overcome. The first was when he was forced to retirement in 2007 due to a crash suffered after dominating nearly all the race. The second was the suspension of the 2008 Dakar edition due to terrorist threats. However, fully developed as a rider, Coma was able to overcome those blows by achieving his second triumph in the Dakar in 2009, this time in South America.

That result converted him in the first Spanish rider to win the mythical race twice, signing a new golden page for the national sport. After the controversial penalty in the 2010 Dakar that left him in fifteenth overall position, the next year Coma recovered his throne. For the first time in MRW livery, the Spanish rider had a brilliant performance and achieved his third victory.

This season, the MRW Red Bull AMV Team rider has competed in the most important races of the specialty, adding three more victories in Cross Country Rallies World Championship. At 35 and with nine participations in the Dakar behind him, Coma is writing one of the golden pages in the international Raids/Rally competition. That is why this new Dakar edition starts better than ever: Coma will try to achieve his fourth victory, again with the team mate that will accompany him for the second year in a row, Joan Pedrero.