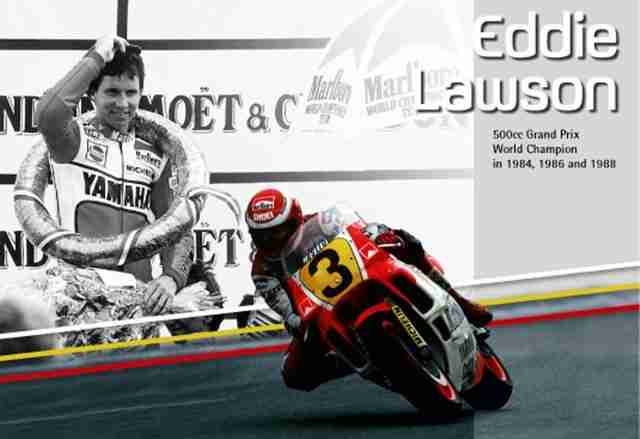 Yamaha have been fortunate to see some of the greatest and most talented road racers in the history of the sport throw their legs over the formidable machinery from Iwata and none more so than ‘Steady’ Eddie Lawson, who claimed a total of three 500cc World Championships with Yamaha and helped evolve Yamaha’s two-stroke technology during the 1980s.

Born on March 11th 1958 in Upland, California, Lawson was the ‘hot-shoe’ (a term given to the most exciting youngster on west coast dirt-tracks) during a purple patch for American motorcycling with the likes of Kenny Roberts, Randy Mamola and Freddie Spencer decimating the international scene and names like Rainey, Schwantz, Kocinski, Roberts Jnr to come. That Lawson stood out and was immensely successful (AMA 250cc and Superbike crowns to his credit before heading into the GP world championship) was already a testament to his skill, coolness, consistency and overall ability that seemed to have little in the way of weaknesses. Eddie made his Grand Prix debut in 1983 with Yamaha on the OW70, the second V-4 for the firm and the first to adopt Yamaha’s new Deltabox Alumium frame, as a protÃ©gÃ© to Roberts and was swift with his adaptation finishing 4th in the championship with four podiums.

It was with the OW76 in 1984 that he captured his first ‘number one’ plate. He was then the principal figure for Yamaha’s efforts in the premier class for the following four years, where he added two more titles in 1986 and in 1988 with second and third classifications in 1985 and 1987. Aside from being the fourth most prolific 500/MotoGP World Champion, Lawson is well remembered as one of the fastest and fiercest ‘warriors’ at a time when road racing featured brutally quick motorcycles and phenomenally quick competition. After 127 Grands Prix and 78 podiums with 31 wins (of which 26 with Yamaha) Lawson retired in 1992. He was granted the status of MotoGP Legend by the FIM in 2005 and was also inducted into the AMA Hall of Fame. He remains a welcome face at the U.S. Grand Prix with the visits of the current series to the scenic Laguna Seca Raceway.