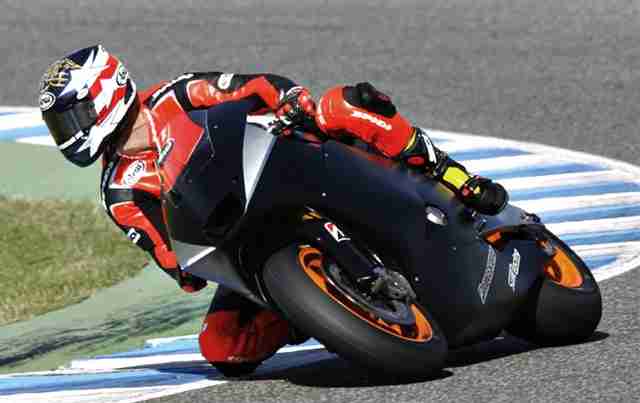 Over a dozen riders gathered at the Andalusian track in a three-day test that featured MotoGP, CRT and Moto2 bikes on track together. Despite prevalent rain earlier in the week, the first day of testing was held under sun and clear skies, encouraging the riders to squeeze all they could from the eight hours of work allotted to them each test day.

Likely to be marked as the start of significant chapter in MotoGP history, the claiming rule teams (CRTs) were out in Jerez the past three days testing their MotoGP machinery, which is comprised of production-motorcycle motors with custom-built chassis. While not the first time we’ve seen a CRT bike on the track, the outing was the first time that  a”top-tier” rider was on-board the new racing format motorcycles, as Colin Edwards lead the charge with his BMW/Suter machine with NGM Forward Racing. Edwards wrapped up his first experience aboard CRT machinery riding the BMW-powered Suter CRT bike of his new team for 2012, NGM Forward Racing. The experienced Texan posted a best time of 1’43.9 during his 39 laps, in his first day of track action since getting injured in the tragic accident that claimed the life of Marco Simoncelli at Sepang. The American was absent for both the Grand Prix of Valencia and end-of-season official test held directly after at the Ricardo Tormo Circuit.