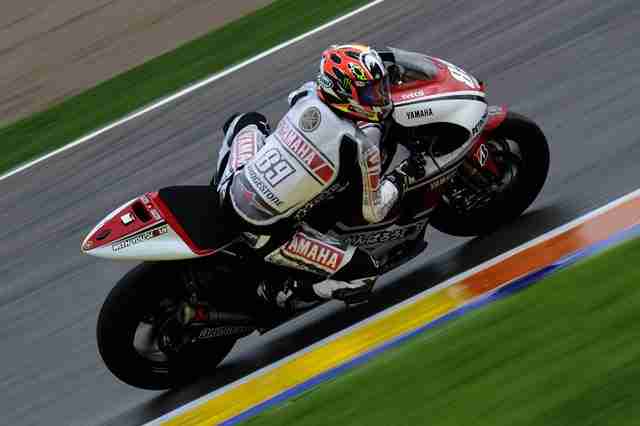 The recent 2011 MotoGP World Champion, Casey Stoner, added today in Cheste a new feat to his track record. The Australian rider of the Repsol Honda Team achieves his 12th pole position of this season. With this result, the aussie matches the record set by Mick Doohan 500cc in 1997 and Marc MÃ¡rquez 125cc in 2010. Yamaha Factory rider Ben Spies made it count this afternoon in difficult weather conditions to take third on the grid for tomorrow’s Grand Prix of Valencia. The Texan completed his fastest lap on a used set of tyres having patiently circled waiting for a gap in the changing weather to put in a qualifying time. Valentino Rossi and Nicky Hayden posted the sixth- and seventh-best times, respectively, and they’ll start tomorrow’s race from the second and third rows of the grid. Weather forecasts for the race are still uncertain, but both riders were fast in the wet on the first day, and they also have decent setups for the dry. The MotoGP riders didn’t have to face truly wet conditions during qualifying for the Valencia Grand Prix, as they did in both of the previous day’s sessions, but the track was nonetheless cold and slippery, and very difficult to master.

Katsuyuki Nakasuga faced yet another treacherous day of unpredictable weather as he learnt his way around the twisty Valencia circuit. A fresh rear tyre towards the end of the qualifying session saw him exit the pits in confident mood to set a qualifying time however the drops of rain on the track meant he was unable to improve on 15th position. Dani Pedrosa and Andrea Dovizioso, achieved the second and eighth fastest time in the qualifying session. In this Saturday’s free morning session, the first held on dry this weekend, the Repsol riders led again the MotoGP classification. The new World Champion of the premiere category, Casey Stoner, dominated the practice, setting the fastest time in all sectors and being the only rider able to stop the clock in 1 minute and 32 seconds. Dani Pedrosa achieved the second fastest time, 663 thousandths behind the Australian, while Andrea Dovizioso recovered from yesterday’s result with the fourth place.

Stoners team mates in the Repsol Honda Team, Dani Pedrosa and Andrea Dovizioso, had mixed results. The Spaniard set the second fastest time of the qualifying and will start from the first row of the grid, but the Repsol Honda Team number 4 qualified in eighth place after suffering a crash in his last outing. Dovizioso dislocated the thumb of his left hand, but his presence in tomorrow’s race is not in danger.

Before the qualifying, Repsol’s General Director of Communication and Chairman’s Office, BegoÃ±a Elices, greeted the three Repsol Honda Team riders, Dani Pedrosa, Casey Stoner and Andrea Dovizioso, together with Shuhei Nakamoto and Honda HRC’s Livio Suppo, whom she congratulated for the excellent season and the success they have achieved.

Tomorrow the 2011 season will end with the MotoGP race of the Comunitat Valenciana Grand Prix. The Repsol Honda Team will try to achieve its fourth consecutive victory and Stoner will try to match a new record, his own of most victories –10 in 2007– in one season.

Here are the results from today: