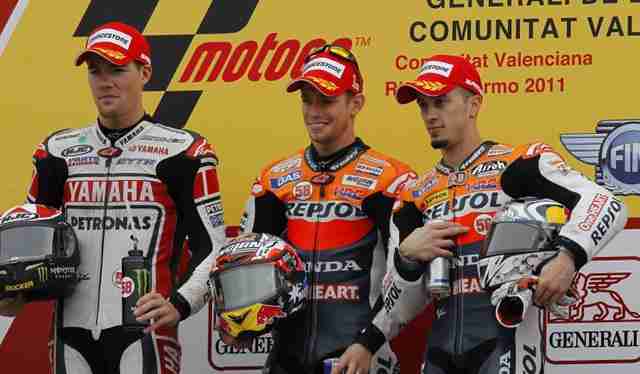 Stoner takes victory by 15 thousandths of a second. The MotoGP World Championship finished in the same way it started, with a victory for Casey Stoner. The Australian finished an excellent season with a well-deserved victory at the Comunitat Valenciana Grand Prix. Yamaha Factory rider Ben Spies delivered a sensational performance today to take second at the Valencia Grand Prix. The Texan was quick to tuck in behind the fighting duo of Andrea Dovizioso and Dani Pedrosa, pacing the two as they fought for position. With seven laps to go he made his move and began to close down race leader Casey Stoner. Capitalising on a small mistake by the race leader, Spies moved to the front and managed to create a small gap. Unfortunately the last corner saw Stoner fight back, charging to cross the finish line just 0.015 seconds ahead.

Stoner started the year winning the first Grand Prix, Qatar’s, and today he succeeded again in the last round of the season. Casey Stoner, the 2011 MotoGP World Champion was able to match his own personal most victories record in one year –10 in 2007– at the Ricardo Tormo. Starting from the first position of the grid, Stoner was able to built some advantage in the first laps. His pace could not be matched by his team mates, Dani Pedrosa and Andrea Dovizioso, the two first riders to try to catch him. His advantage increased up to ten seconds. Katsuyuki Nakasuga put in a brilliant performance today in his first ever premier class MotoGP race. The Japanese rider has faced challenging weather conditions all weekend on his first visit to the Valencia circuit. Faced with a grid of experienced GP riders and hugely changeable track conditions, Nakasuga-san delivered, holding his own and fighting through to take a very respectable sixth place finish.

Today’s Grand Prix at Valencia was not only the last of the season, but also the last of the 800cc era. Although unable to ride for the last two Grand Prix, Jorge Lorenzo has amassed enough points to seal second in the Championship standings with 260. After a positive first two days during the final round of the 2011 MotoGP season, the Ducati Team had an unfortunate and premature end to the Valencia Grand Prix, with riders Valentino Rossi and Nicky Hayden both being taken out of the race in a Turn 1 racing incident.

The American experienced pain and swelling in his right hand following the fall, but an X-ray in the mobile clinic didn’t reveal any fractures. Rossi and Hayden finish the season seventh and eight, respectively, in the final points standings. In the last part of the race, the rain started to fall on the Valencian track and differences were reduced. The Aussie saw 3 laps from the end how a brave Ben Spies, who arrived from the fourth position, overtook him and led the last laps. Stoner was at his wheel, keeping a sensible distance despite Spies attempts to escape and finally overtook the American in the finish line, with a difference of only 15 thousandths.

His team mates, Andrea Dovizioso and Dani Pedrosa, had one of the most thrilling duels of the race. From the second lap, both riders overtook each other all the time, and only the rain prevented to see the battle last until the end of the race. The Italian gathered his second consecutive podium and secured the third place in the final classification of the 2011 MotoGP World Championship. This morning, the three riders of the Repsol Honda Team participated in the lap of honour and the minute of roar that the World Championship organized as a tribute to Marco Simoncelli. The Repsol rider Marc MÃ¡rquez did not want to miss that tribute that all the motorcycling family wanted to give to the Italian rider at the Valencian track.

With this Comunitat Valenciana Grand Prix, the Repsol Honda Team puts an end to an excellent season where the whole team, together with Casey Stoner, Dani Pedrosa and Andrea Dovizioso, achieved three World Championships, the riders’, the constructors’ and the teams’. From Tuesday, and also in Cheste, Casey Stoner and Dani Pedrosa will start to prepare the 2012 season with the new 1000cc RC213V.