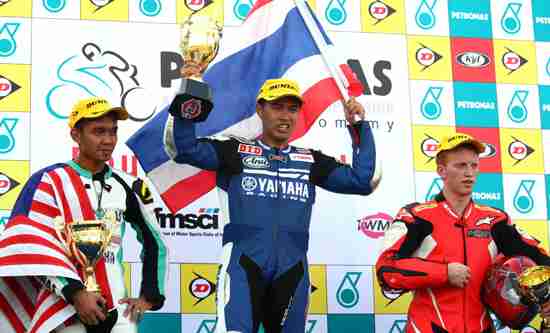 Mohd Zamri Baba definitely made his presence felt in the third round of the PETRONAS Asia Road Racing Championship (ARRC) where he set the fastest lap during the first qualifying session here at the Madras Motor Race Track, India. The PETRONAS Yamaha Malaysia rider not only clocked the fastest laptime but at the same time erased the fastest lap record of 1:44.691s set by Decha Kraisat in 2009.  Zamri did an impressive lap time of 1:44.603s in Lap 11 to hold the new record on the 3.717km track. Despite missing out Round 2, Decha Kraisart meant business in his SuperSports 600cc campaign as he put on a tremendous performance by winning both Race 1 and 2 in the SuperSports 600cc category at the third leg of the PETRONAS Asia Road Racing Championship that is being held at Madras Motor Race Track, Chennai today.

SuperSports 600cc category defending Champion, Decha Kraisart denied Mohd Zamri Baba from his pole position as he stamped his authority in the second qualifying session at the third leg of the PETRONAS Asia Road Racing Championship that is being held at Madras Motor Race Track, Chennai. The Yamaha Thailand Racing ace raised the benchmark higher by setting a new fastest lap record of 01:44.100s as he erased the fastest lap record (01:44.603s) that was set by Zamri yesterday. Zamri of PETRONAS Yamaha Malaysia came in second fastest with an improved laptime of 1:44.131, followed by Australian rider, Aaron Morris of Yamaha Indonesia Racing with 1:44. Yamaha Indonedia Racing’s Doni Tata Pradita put up a strong performance with the laptime of 1:45.851s to take the fourth fastest position ahead of current Championship leader, Katsuaki Fujiwara (Manual-Tech BEET Kawasaki Racing) who clocked 1:45.941s in fifth placing. Meanwhile, Moto-Rev India rider, Toshiyuki Hamaguchi came in ninth fastest (1:46.548s), followed by Yusuke Teshima (Suzuki Pilipinas) with the laptime of 1:46.504s.

Special thanks to Mr Prativ Selvaraj for providing the photographs.