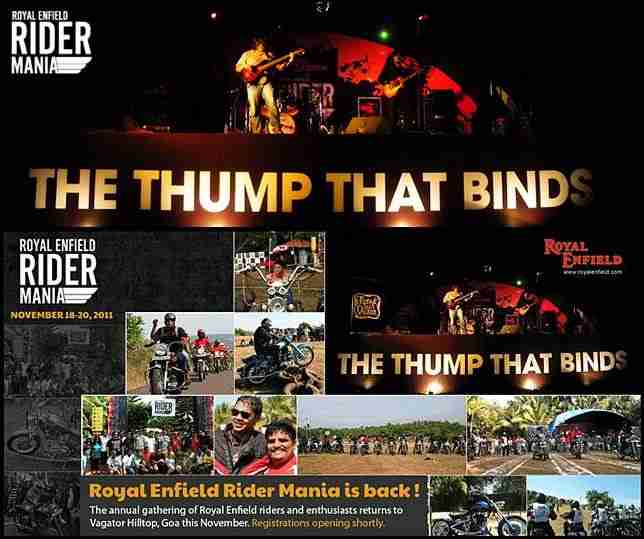 Royal Enfield’s Annual Biker Fest happens  in Goa, November each year. During the three days, hundreds of Royal Enfield riders from all over the country will converge at The Hill Top, Vagator in Goa for the Royal Enfield Rider Mania 2011 to celebrate ‘The Thump that Binds’ them together.

The event in its ninth edition is the one where you will meet passionate like-minded Royal Enfield fans, swap ride stories, discuss motorcycles, and pit your skills against each other in competitive events like Dirt Track Racing, Trials, Slow Race, Arm Wrestling and the unique ‘Carry your Royal Enfield’ event. For shutterbugs there is a photography contest. The Custom Bike competition shall see the best of metal and chrome come down from all over India to entice the crowd with their uniquely built and painted Royal Enfield motorcycles. After sundown the real party begins with rock bands and DJs belting out the latest mixes late into the Goan night. Other major attractions would be the access to rare Royal Enfield literature and video footage from the archives and genuine Royal Enfield merchandise.
There would be stalls selling gear, tattoo artists and lots more which would ensure that you carry back something more from just fond memories of the Royal Enfield Rider Mania 2011.