The focus of the 2018 Movistar Yamaha MotoGP Team Presentation event was obviously on celebrating the start of the new season, rather than commemorating past achievements. Eager to take on the challenge to push the limits even further in 2018, the two companies (Telefónica Spain and Yamaha) unveiled a new team logo, that shows Movistar’s new colour scheme, with a light blue “M”.

Rossi is determined to further confirm his status in 2018, as he enters a sixth consecutive year with Yamaha Factory Racing since his return to the manufacturer in 2013. Moreover, 2018 will be his 13th season with the team since he first joined Yamaha in 2004.

Though the Italian had a strong start to the season last year – and briefly led the championship standings – two injuries sustained in separate incidents ultimately cost him a chance to fight for the 2017 title. Despite these misfortunes, the 38-year-old Italian secured six podiums in total, including a brilliant race win in the Netherlands. With a total of 115 Grand Prix victories written to his name, this year he’ll be gearing up once more for his quest to secure a tenth World Title.

Viñales made waves on his first year with the Movistar Yamaha MotoGP Team. He joined the Factory Yamaha crew after gaining two years of experience in the premier class and was quick to make a name for himself as one of the key protagonists, securing third place in the overall rider standings in his first year with Yamaha.

The 23-year-old had a dream start to the 2017 season, taking two race wins at the opening rounds in Qatar and Argentina. He followed it up with a win in France to secure Yamaha’s 500th Grand Prix victory. Though the remainder of the season was more challenging for the Spaniard, he still graced the podium a total of seven times last year, which only left him hungrier to compete at the front of the MotoGP field again during the 2018 season. 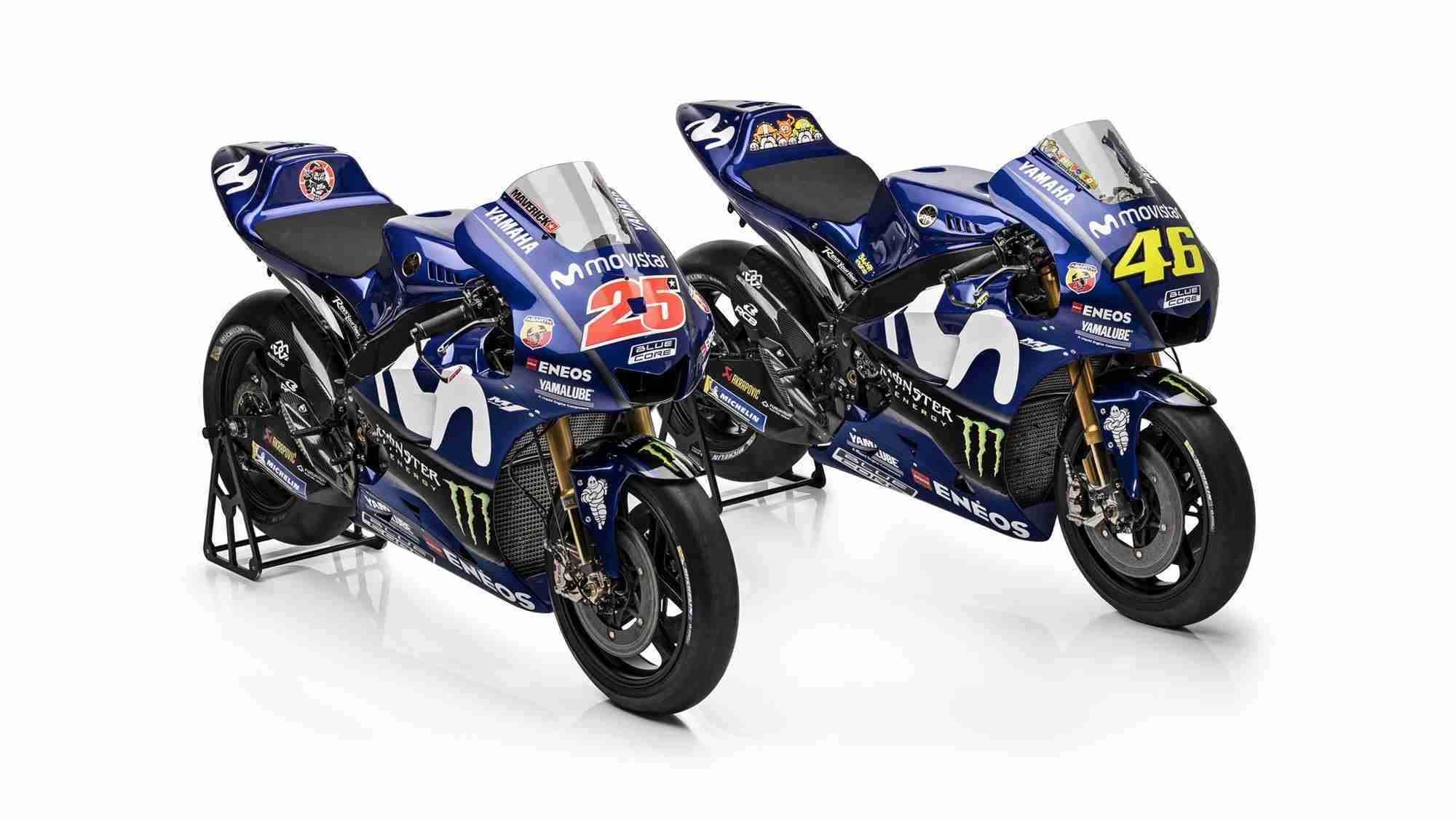 Finally, the President of Telefónica España, Luis Miguel Gilperez, was also put in the spotlight towards the end of the 2018 team launch ceremony. He further highlighted the close bond between Yamaha and Movistar, before it was time for the main event.

During the unveiling of the 2018 Yamaha YZR-M1, a new soundtrack, created by Yamaha Motor Racing Srl and Yamaha Music Europe GmbH – Branch Italy, set the scene of the action to come this racing season. Rossi and Viñales proudly presented their new bikes with a refreshed livery. Besides a revamped Movistar logo, the “Movistar M” design element on the bike is now white, making it blend in perfectly with Yamaha Factory Racing’s aesthetics.

“First of all, I want to say that I’m really sorry to have missed the team presentation event due to some health problems.

The team came to Madrid again this year, to be joined by Telefónica Spain for the unveiling of the new team colours, before embarking on the 2018 season challenge. This will be the fifth year that our team continues its partnership with Movistar. The collaboration has led to many successes in the past, including the Triple Crown in 2015 and the Team Title in 2016. We have celebrated our achievements together, but we also learned together when things didn’t go our way.

During the upcoming pre-season testing we will not be sitting still either. We see the start of 2018 as chance to start afresh. We’ll be taking new opportunities with both hands and have set the goal to push ourselves that bit further.

We also have a new team logo and updated livery features that visualise the strong partnership between Movistar and Yamaha. I’m sure Maverick Viñales and Valentino Rossi are equally impatient as the fans to get the show back on the road. At Yamaha we’re very much aware that, though riders are on their own when they head out on track, racing is essentially a group effort. The riders’ dedication and commitment will be matched by that of our engineers and team staff, as well as the partners and sponsors, so I’m looking forward to a competitive season.”

“I had a great time today! The team presentation is special every year, also for me, because when you see your bike in the new colours, you start to feel excited. During the winter break I always miss riding my M1, and after seeing it today I want to ride it as soon as possible. I only have to wait a few more days!

Sincerely, I’m looking forward to starting the new season. Last year, I had one win and six podiums, but also some problems and injuries. We want to make our fifth year with Movistar memorable, so this year we will be pushing as hard as we can. The test in Sepang will be important. It’s the first opportunity for my guys to get together this year, which will be fun, but we’ll soon get serious, because we want to get an idea of our level as soon as possible.” 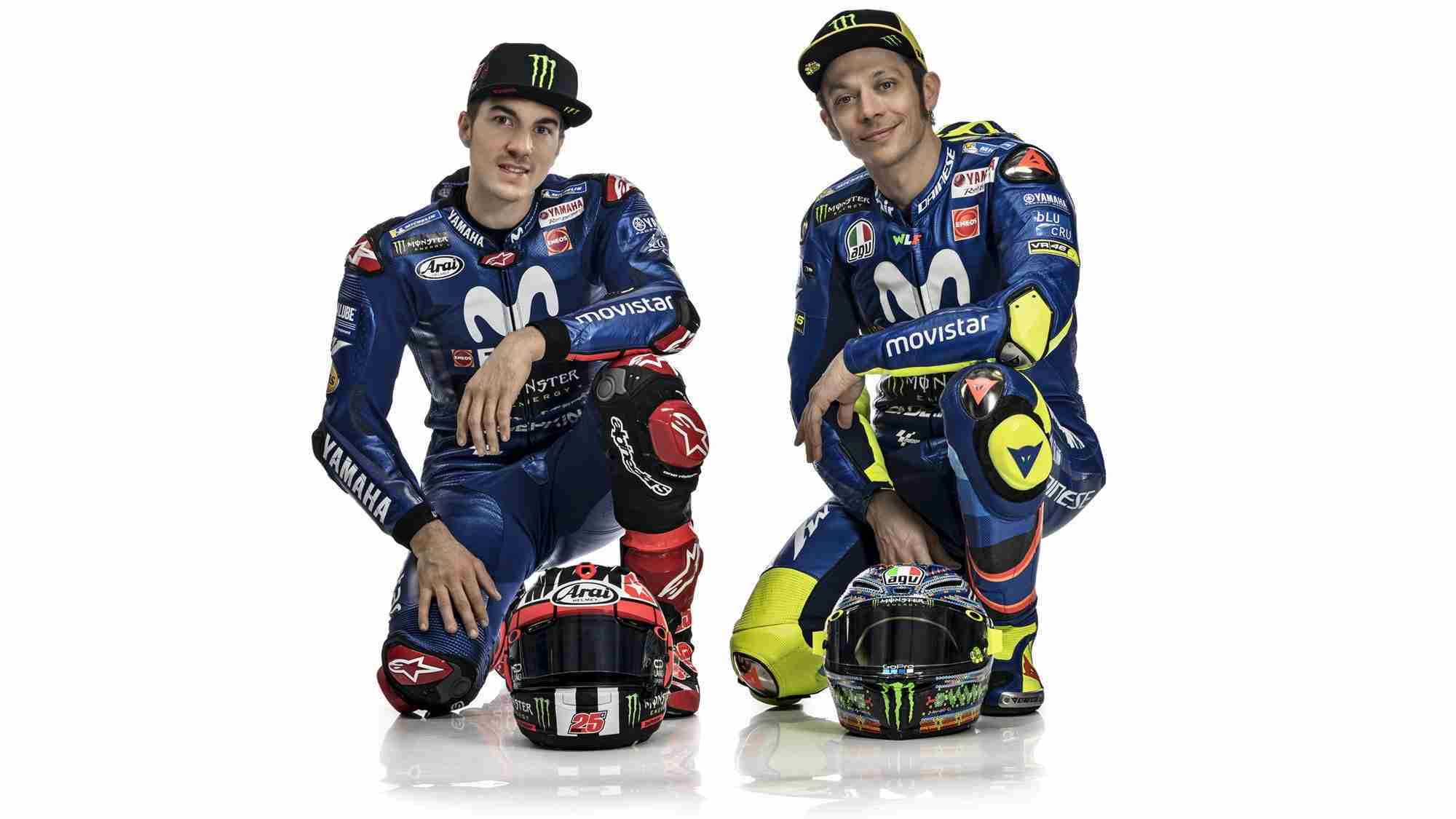 “After more than two months of waiting, we are finally kicking off the new season. I’ve been working hard to prepare for the start of the new season and I’m looking forward to riding my M1 again. The bike, the new colour scheme, and also the new team logo look good, so judging by the looks of the team, we are ready to begin testing.

Last year we had a really strong start at the first few rounds and we finished third in the championship. This year we’ll try to improve on what we did last year. We have a really good team, so I think it’s only natural that we aim for the win in every race and ultimately for the championship title, but of course we’ll only achieve this if we stay focused every session and push as hard as we can.

We’ll be giving the 2018 bike a try in Sepang in a few days’ time, which is also where we held our last test of 2017. We’ll use that data to start the season in the best way possible. The first time you start the engine and hear the sound of your new bike is something special – it will be the sound of the new season. I’m looking forward to a great year!”