The 2018 Ducati MotoGP Team, which will take part in the MotoGP World Championship with Andrea Dovizioso and Jorge Lorenzo, was presented today in the heart of the Ducati factory at Borgo Panigale, Bologna. Final preparations have now been made for this challenging season, which gets underway with the first of 19 rounds on the calendar in Qatar on March 18. Andrea and Jorge will be back on their 2018 Desmosedici GP machines, which were unveiled in a brand-new captivating red and grey livery, at the end of the month.

Claudio Domenicali, Ducati Motor Holding CEO, declared at the start of the presentation: “2017 finished well both from a business and racing point of view, and we sold almost 56,000 bikes. We are ready for 2018 and we are really confident that it will be another positive year. It is a year in which, for the first time, our fans will have available a bike which is a close relation to a bike we developed in racing, the Panigale V4. It’s a very important year also for the Scrambler, with the arrival of the 1100 adding a completely new dimension to this world, made up of larger dimensions and better comfort, performance and technology, all clearly in perfect Scrambler style. It will also be the year of World Ducati Week at Misano from July 20-22, and we want to organise the best and most complete WDW of all time.

Ducati is a strong and solid company that has become big enough to allow important investments for the future. We are in a fantastic period: the digital revolution and the world of social media are changing all of our lives and Ducati wants to be an agent of this change, all the time preserving its own values.

I’d like to take this opportunity to thank all those in the company who have enabled us to obtain the results in 2017. Thanks to all of the partners who are by our side for this new MotoGP adventure, and all the best to Ducati Corse for a 2018 with Ducati as protagonist.” 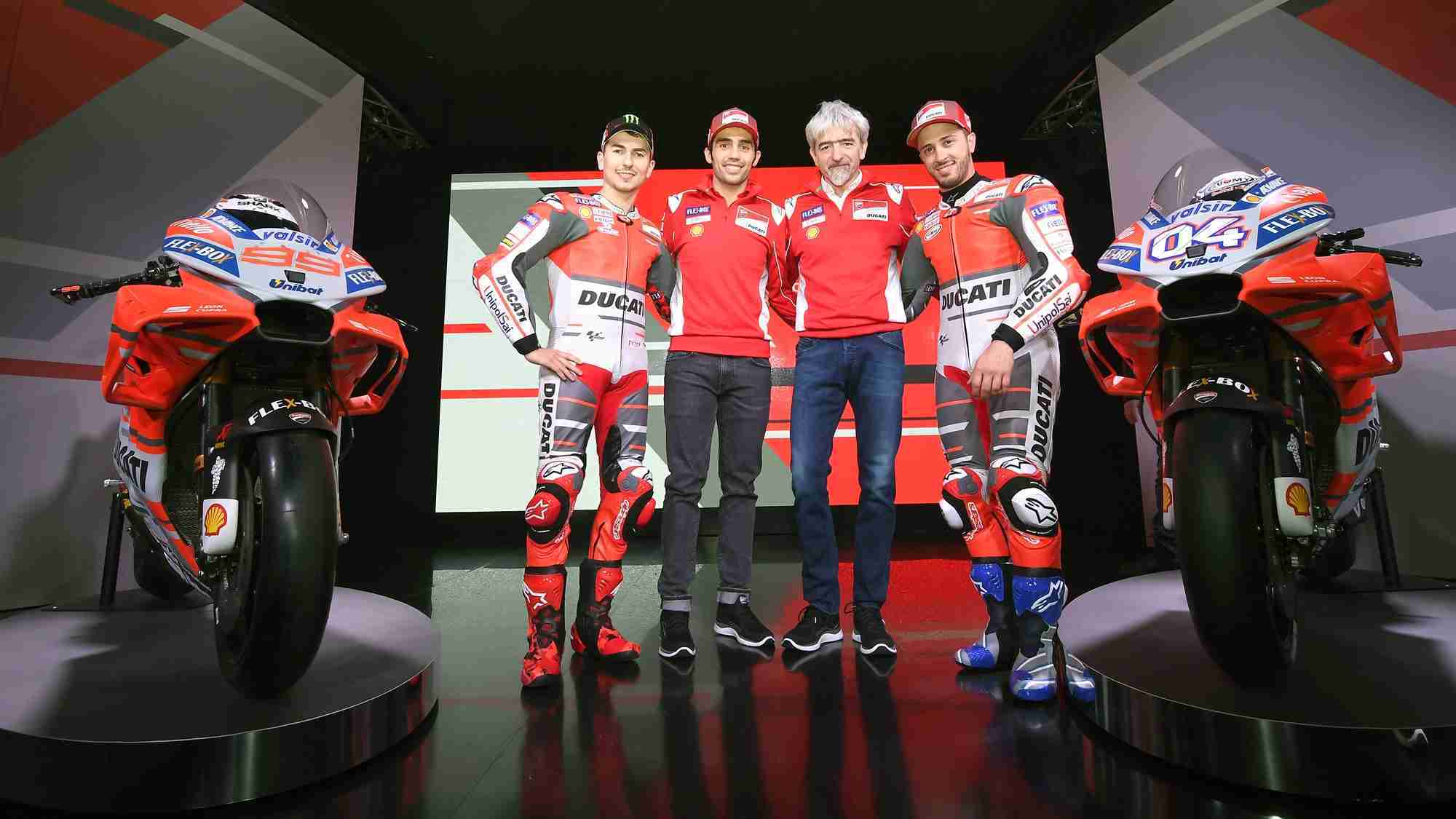 Luigi Dall’Igna, Ducati Corse General Manager, added: “When you come close to winning the title, like last year, it’s easy to lose direction in the development of the bike, and so all the innovations that we will introduce on the new Desmosedici GP will be characterised by evolution, not revolution. I believe that both Ducati Team riders, Andrea Dovizioso and Jorge Lorenzo, are true added value for us and that both of them can aim for the world title in 2018. We only have to make one final step, and we know that it’s not going to be easy because we are up against some really tough rivals and with companies that are much bigger than us. In any case we will try and do everything possible to make 2018 a truly memorable year for us and for all the Ducatisti.”

Andrea Dovizioso (#04, Ducati Team rider): “Last year was a superb and very successful one, and we also learnt a lot of things on which we can continue to work this year. Our bike still had certain characteristics that made life difficult on several tracks and for 2018, we have focused on improving these aspects because we must always be in a position to fight for the podium, at every circuit. After finishing runner-up with six wins in 2017, naturally our objective can be nothing less than fight to win the championship, but we must remain with our feet firmly on the ground because we know that each year brings with it something different. In any case we are starting off with the competitive level of last year and we must only remain focused 100% like last year, when me and my team worked really well together.” 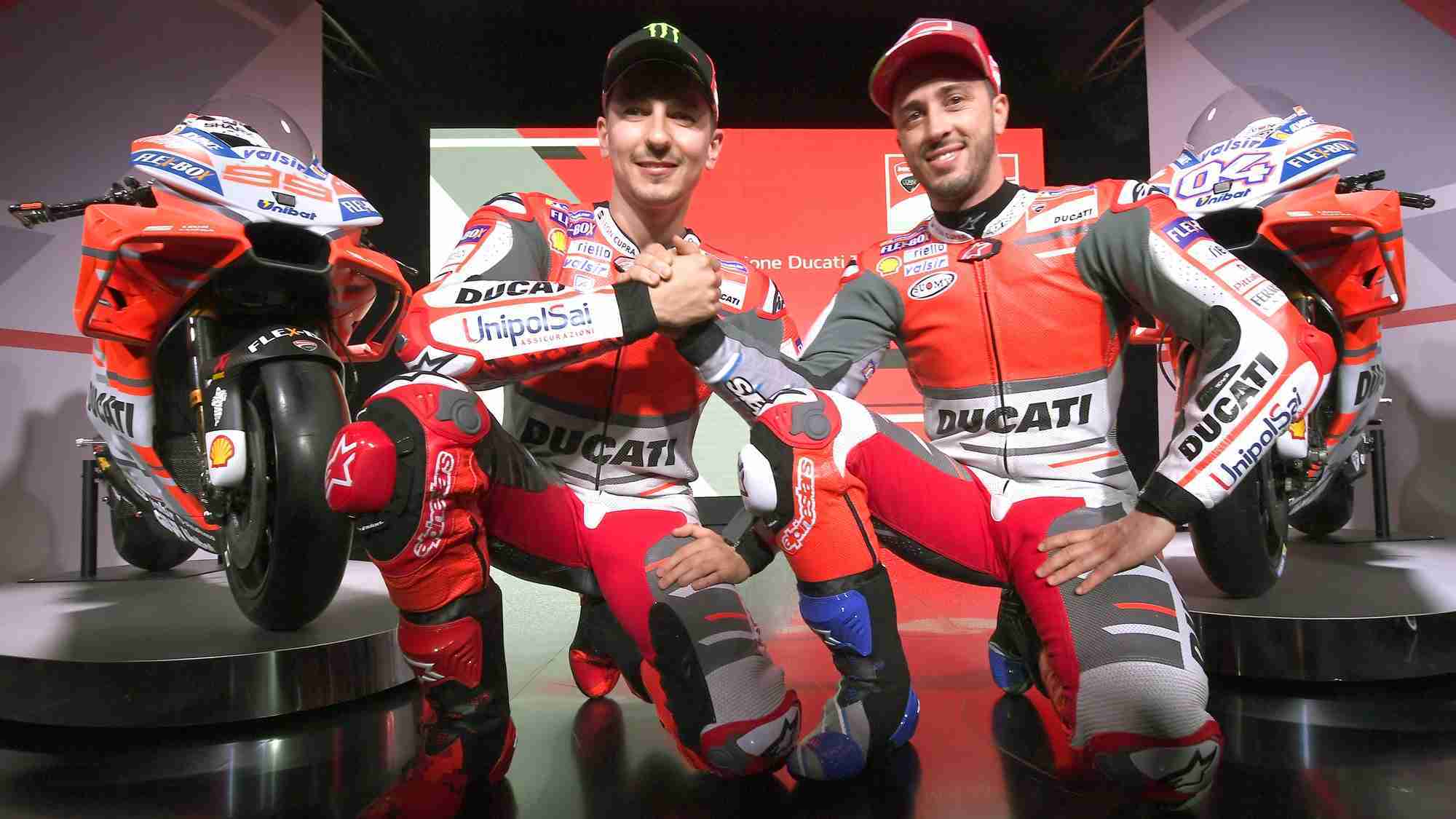 Jorge Lorenzo (#99, Ducati Team rider): “2017 was quite a difficult year for me, because I didn’t even win one race and at the start of the championship I wasn’t able to fight for the podium, but I was patient and never gave up, and in the last few races we finally scored some quite good results. The work of the team was very important and Ducati helped me a lot to adapt the bike to my riding style, and so I think that in 2018 we’ll be starting with a much more competitive base. Andrea and the Desmosedici GP demonstrated that we have everything in place to try and win the world championship, and I think that I have the strength and the experience necessary to fight together with him to achieve this aim. I believe a lot in our chances and I’m convinced that we are stronger than one year ago. For me to be a Ducatista is something really special: I’m very proud to have accepted this challenge and I have felt part of the family since the very first day, and so I’d like to repay the passion and the support we receive from Ducatisti all over the world with lots of wins and, if possible, with the world title.”

The Ducati Team will leave in a few days’ time for Malaysia where the first session of official pre-season tests will take place at the Sepang circuit from 28 to 30 January.