Marc Marquez put on a stellar performance to secure a crucial victory at the Australian Grand Prix, the 61st win of his career, his 35th in MotoGP, and his sixth this year. The performance extended his Championship lead to 269 points, 33 ahead Andrea Dovizioso, who remains his only rival for the Title.

Marc was aware that today he had a chance that was too good to miss, on a circuit he loves. However, he had to face an incredibly close, race-long battle in an eight-rider leading group formed by Marquez, Rossi, Viñales, Zarco, Iannone, Miller, Crutchlow, and Rins, fighting hard and constantly swapping positions from the start to two thirds of race distance.

Marc waited for his moment before taking the lead on lap 21, then pushed hard to pull a gap on his pursuers and crossed the line 1.799” ahead of Rossi and 1.826” in front of Viñales in third.

Rossi had a strong start from seventh on the grid and soon found himself in fifth position after the first few corners. He continued to push hard on lap 1, crossing the line in fourth place, right behind his teammate. An early battle with Johann Zarco saw him move back to fifth, but he was soon riding in third place, with 25 laps to go, when Marc Marquez and Zarco went wide. Passing Viñales, the Doctor looked to be on a roll when he overtook Jack Miller for the lead two laps later, but chaos was about to ensue.

Zarco and Marquez made a comeback as Rossi went wide in turn 4, with 18 laps remaining, and Miller did the same shortly after. The Italian didn’t hesitate to fight his way back to the lead again, but he was unable to break away as the battle at the front continued. 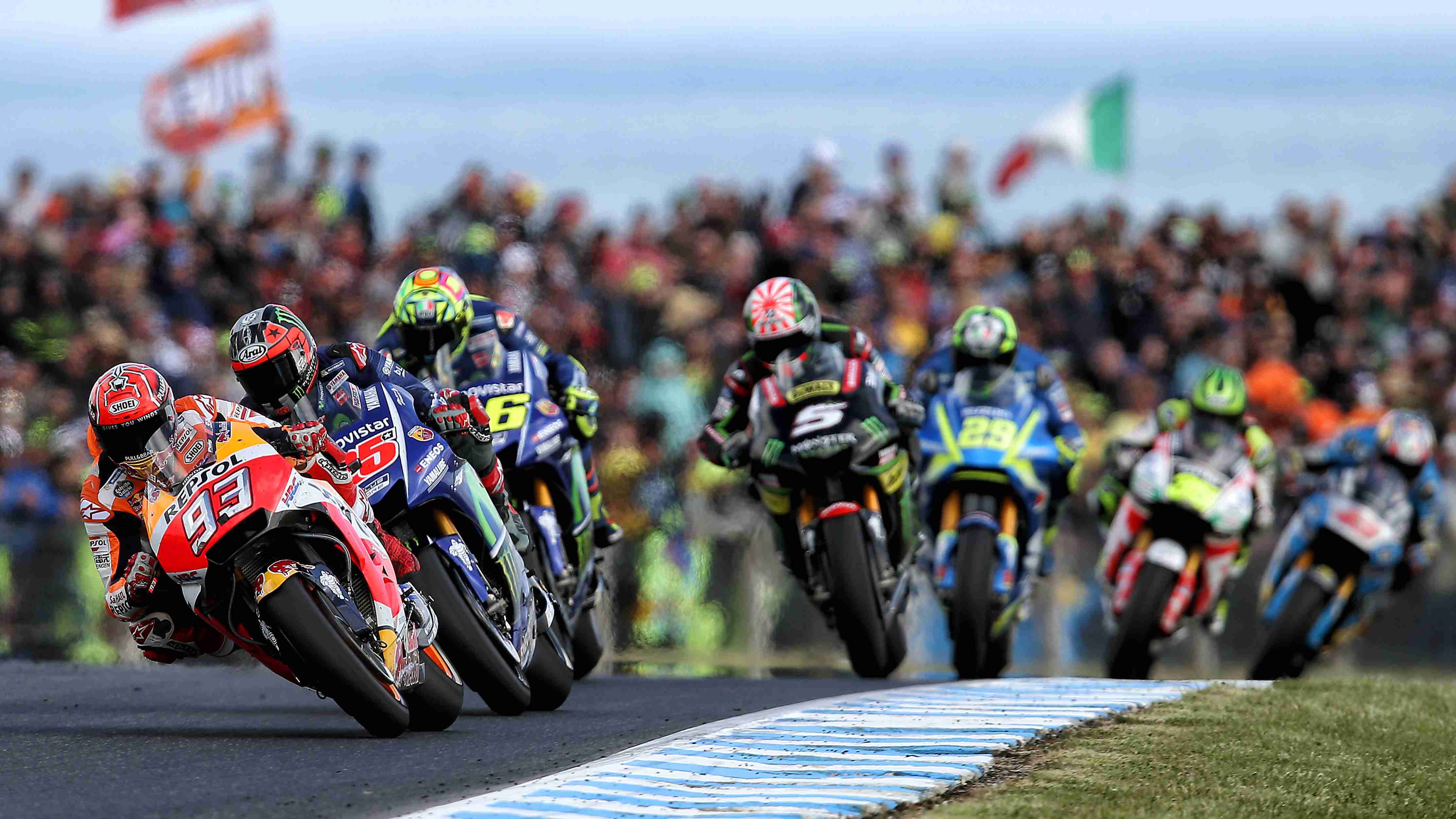 The Doctor was riding in second place when, with eight laps to go, a touch of Marquez’ front wheel pushed him back to fourth. Yet, a manic four-lap dash at the end of the race saw the nine-time World Champion retaliate. He set consistent personal best times in sectors one and two to start the last lap in second place. With a two-second gap to Marquez, he focussed on holding off Zarco and Viñales and took the chequered flag in second position, 1.799s from first. This result earned Rossi his 17th podium finish at the Phillip Island track.

Viñales had a good start and immediately looked threatening behind frontmen Miller and Marquez. After two laps his tyres were warm and he was ready to make a move. As he overtook Marquez, he took Rossi with him. His teammate passed him with 23 laps remaining as they continued their chase after the leader, but the Spaniard wasn’t to be shaken off easily.

When Rossi overtook Miller, Viñales launched himself past both. He was leading the race, but it wasn’t to last in today’s frantic MotoGP battle. He soon had to deal with Marquez, Zarco and Miller again and the Spaniard found himself in fifth place, with 15 laps to go, behind his teammate.

Seeing Rossi carve through the field, Viñales cautiously picked up places, but it remained a push-and-pull fight at the front. He had his head down, but soon had to start all over again as fighting with Zarco and Andrea Iannone pushed him wide and made him fall back to seventh place. He climbed back up the rankings, picking off Miller and Cal Crutchlow with five laps to go, and used his saved-up tyre life to perfection in the last laps to breeze past Iannone and overtake Zarco over the line for third place, pipping him by 0.016s, to take third place, 1.826s from first.

“It was such an amazing race, I think we put on a fantastic show for the fans! I’m very happy, as I knew that today was important. Dovi was struggling a little this weekend, while I was feeling really good on the bike and had to make the best of it. When the race started I was thinking I had to stay calm and manage the tyres, but then Zarco hit me and I realised it was going to be a battle. I was in a group of fighters. I knew I had to push and defend, but also to attack. So I just tried to control the situation and then, with around eight laps to go, I just gave it my all. I pushed really hard for three or four laps and that was it. I’m happy with the win of course, but even more with going to Malaysia with a 33 point advantage!” 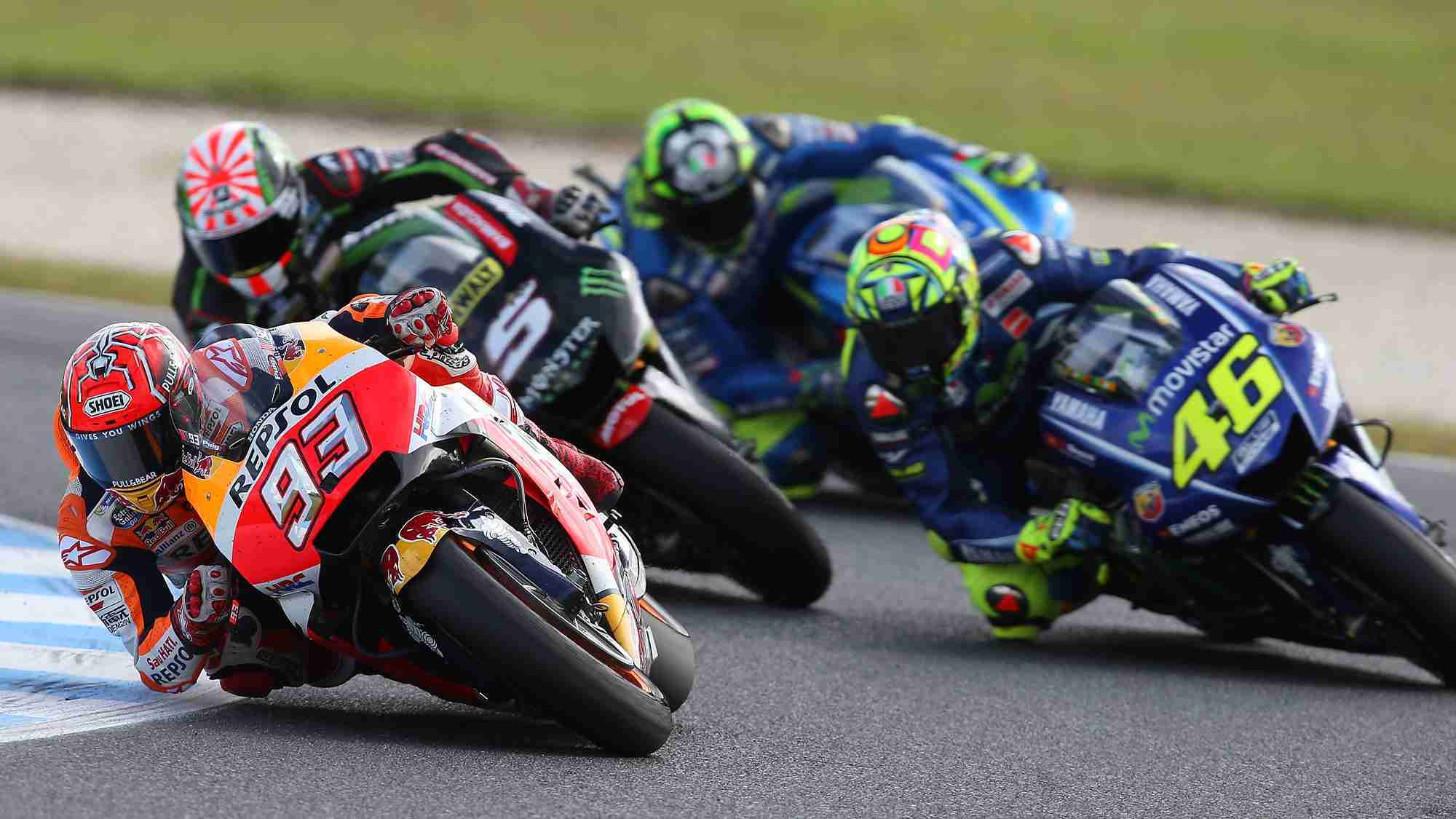 “I enjoyed the race very much. This track is unbelievable and it was a great race! All the riders in front were very aggressive, so you need to be more ‘stupid’, more aggressive, than they are. It was a great battle with Zarco, Iannone, Marquez and Viñales. I wanted to try the maximum to be on the podium. In the end I’m in second place and I’m very happy. I want to say thanks to all my team, they always work very hard, and thanks to all of Yamaha.”

“I had planned on attacking with five laps to go. On the previous lap, I had already overtaken Johann and tried to overtake Valentino at the last part of the straight, but I went wide. I had a moment with Johann on the outside and then went towards Andrea. I lost my race there, but in the end I recovered really well. I started to overtake the other riders fast and, honestly, I was quite far back from where I needed to be in the last corner, but the bike accelerated really well and I even thought I could pass Valentino. In the end he was a bit too far ahead, but I’m still really happy. The team was working really well and especially this morning in the rain I felt great and that’s a good starting point for Malaysia. There are a lot of positives to take from this weekend, especially on the soft tyre. The championship challenge is gone, this is not good news, but we already knew all season it was going to be difficult, especially during the second part. We have to try to be strong, as always, and try to be on the podium again in Malaysia. I want to recover some points to Andrea, which is important. We’re going to try to make the bike work and try to have one of our strongest weekends.”