Repsol Honda’s Marc Marquez is the 2017 MotoGP World Champion after taking the third place in Grand Premio de la Comunitat Valenciana. A race which was had enough twist and turns and was the ideal season finale.

Marquez has now equalled Jim Redman and Geoff Duke’s tally of 6 World Titles in his career.

“I’m living a dream. ‘Six Titles’ are big words. The truth is that I’m incredibly happy because we worked so much this year, and today the race was incredibly tense and exciting—a bit ‘Marquez Style.’ I made a mistake, but I also made my best save of the year. From that moment on, I just tried to finish the race in a good position. I’m sorry that Andrea didn’t finish the race, as he deserved to do so. He had an incredible season and I would have liked to have him on the podium with me today. The key to the year has been our mentality. In our world it’s very important to remain positive and motivated during the difficult moments. Some things happened to us at the beginning of the season but when we found the way to sort things out, everything went better. Congratulations to Honda and the entire team for the Triple Crown. It’s an amazing achievement. Winning the Title at the last race of the season in front of our fans is one of the best things possible, really special. Now I want to enjoy this with my entire team and my family, and after that we’ll start to work for next year.” 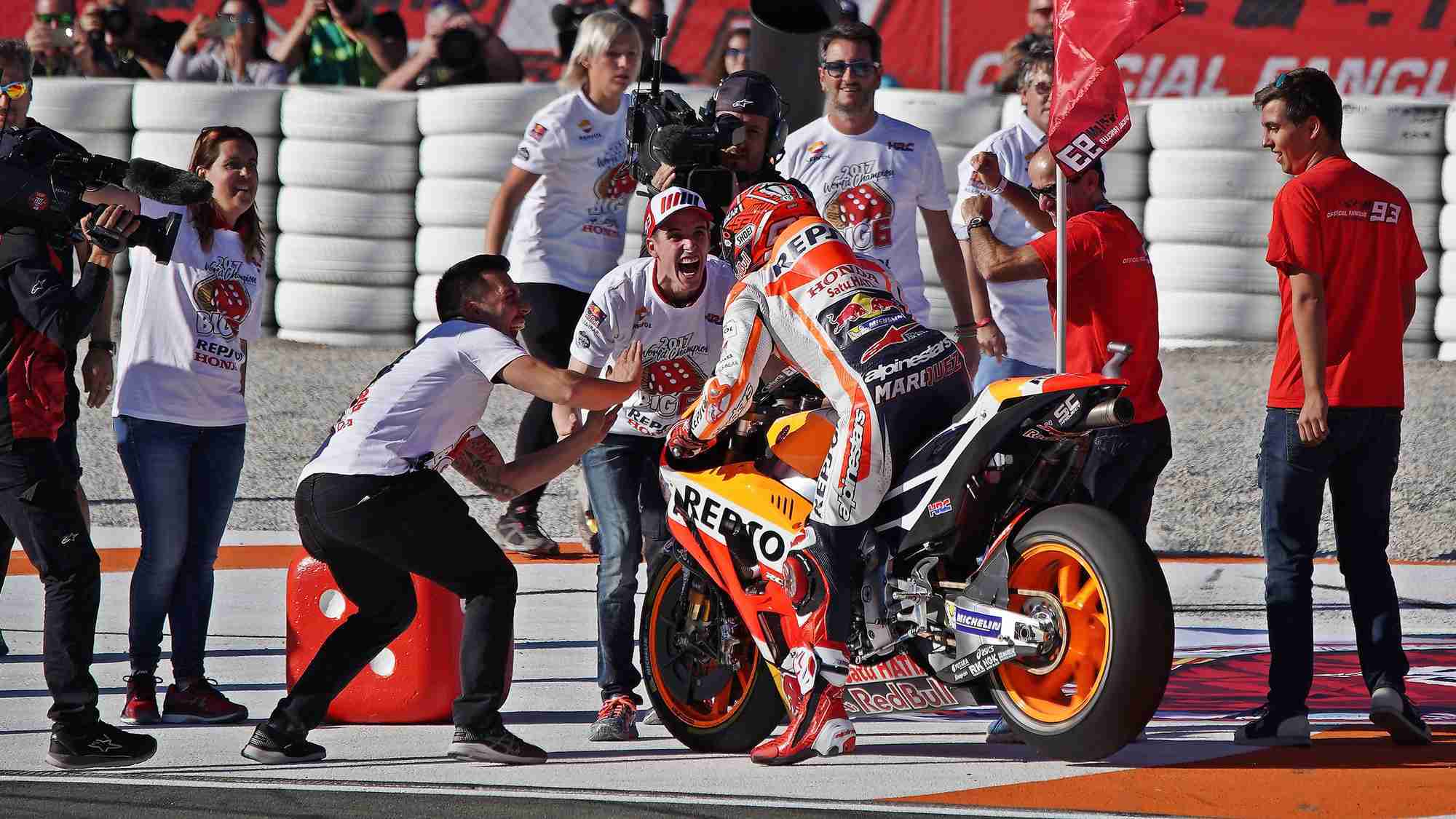 In the following interview, he looks back on the season, and explains the determination required to turn around a campaign that did not start as well as he had hoped.

“(Laughs) It’s better now, but not yet 100% recovered. That was a story I had not told anybody, and if I had not won the title I would have kept it secret, but it was something that I think is curious. It was after Montmeló, I was getting my hair cut by my usual hairdresser and she asked me ‘What’s happening to you?’ I was surprised and said: ‘Nothing, I’m fine,’ to which she answered: ‘No, you’re not okay, because you’re losing your hair’. I, of course, got scared, because I didn’t see myself going bald at the age of 24. My grandfather and my father have hair, so I went to see Dr. Angel Charte, who is the doctor almost all the riders trust in, and he told me: ‘Try to absorb all your different problems, because you are creating such anxiety, stress and nerves that you are losing your hair.’ He gave me a cream, but apart from that , I tried to absorb the problems or focus on races differently, because the pressure was overwhelming me.”

“Yes, now I do. There are still some patches, but you can’t see them as they are at the back.  I’m ready to recover completely in the winter.”

“Until I’m really home, have been sitting around for a week and can analyse everything, it’s difficult to digest it. I always say the same thing: The good times come flooding back, and the bad times and mistakes are the things that you also have to analyse; you have to know how to learn. We had bad times, when it seemed that the obstacles ahead were like the highest mountain in the Pyrenées. In the end everything turns around. I’m here, but the team, my family and  friends also played a huge part, because without them this would not be so easy or so beautiful and fun.”

“I have the feeling that everything is happening very fast. I never stop to think between seasons, but I don’t want to do that either. I prefer to live day by day. Now we are here, enjoying this title, but I am very conscious that from January 1st I am just another rider; I will not be the World Champion then, just a rider trying to fight for another title.  It isn’t enough to just look at the numbers. I’m enjoying a great moment in my career, but I hope it continues and that is why I want to keep my feet on the ground and continue with the same mentality.”

“Yes, you change. Especially because you mature as a person. I still have more room to mature, as I’m still only 24. I’m aware that I have to learn many things, but I am one of those people who learns things from setbacks. I’m quite stubborn and until I hit that wall, I don’t see things clearly. I have learned many things and I know I have many more things to learn, but I hope to always keep the same enthusiasm for riding bikes, keep that same passion which gives me energy and be surrounded by the same people. I think that that is the nicest thing for me; riding alone would not make sense. I ride to see the ‘Fan Club’ erupt with joy, and when I go back to the pits the mechanics are happier than me -some even shed a tear.”

“I never ruled out a real chance. I always thought that this would be a very long season. After Mugello I thought it would be very difficult, but after Germany -especially in Holland and Germany- I thought: ‘You can do it.’ We made a change and we started to have fun again. I remember a trip at Le Mans, from the circuit to the airport, where I told Emilio [Alzamora] and José Luis [Martínez] in the car: ‘I’m not enjoying myself on the bike. I’m riding but I’m not enjoying it, and I need to change something.’ Everyone helped me look for that extra boost and, although it looks like everything was very nice, with smiles and everything, we are human beings and go through all kinds of moments.”

“Andrea has been a very different rival because, first of all, I didn’t expect him to be there. Secondly, because of his mentality. I learned many things from him, such as the idea of ​​focusing on yourself and not changing your style. Above all, I learned a very important lesson: You cannot underestimate anyone in the World Championship. We talked about Andrea [Dovizioso] as if he were an outsider, and we said ‘yes, he has won a race, but he won’t be in the fight for the title…’ In the end here, in MotoGP, we have the best riders in the world. They are riders who, if they have the right bike, they are comfortable and everything is in place, they can fight to win races and to win the World Championship. When Dovizioso won races at the beginning of the season, I thought ‘well, he has taken points from the other riders,’ but in the end he turned out to be my main rival. It was a nice fight,  because we have a very good friendship, but on the track we showed now mercy -although we always respected one another 100% and showed fair play.”

“(Laughs) Lots of people have mentioned putting a cat on my helmet. We’ll think of something, although I don’t like cats very much. The ant will stay, because it’s the symbol that has given me luck and the one with which I have identified me since I was little. Riding at the limit is part of my style and I have always said that. I hope that people in the future will remember me as a rider who always gave one hundred percent and provided a show. People see victories, but character and showmanship is what makes the difference. I remember many riders who have not won any titles, because of how they ride, more than others who have won many titles. I hope I can keep this identity until the end.”

“For me the fun is when things get wild! (laughs) That race was Australia when the title was at stake. There were all kinds of collisions, incidents, broken fairings and more, but I did not stop thinking about the championship. It was me against five riders who weren’t competing for the title, only for that race, and I did not hesitate for a moment to get into the the battle. This is motorcycle racing; I had a lot of fun and in the end I won the race, but it was what racing is all about. There was overtaking, it did not matter who was competing for the title and who wasn’t, it was a race and we all ended up happy. Nobody complained and it was the most beautiful race.”

“Honestly, I have not looked at it much yet because I have not had time, but I have taken a quick look and I have seen messages from football players and celebrities. Above all I have seen those messages from my family and friends, who are the ones it is all about. When I finish this interview I will call my grandfather, who I’m sure will be happy to speak to me.

“(Laughs) I didn’t know that, but I’m sure it was a joke. My mother always gets along with everyone and our motorhome was next to Zarco’s. She must have said: ‘Zarco, tomorrow please watch out…’ In the end, this is racing. For example, if Zarco was going to win the race and he had to be aggressive with me, he would do that. These are things that happen, but you also have to be able to manage things and know how to adapt at all times.”

“On Tuesday we start the 2018 season with two days of testing, then we’ll see if we can do more in November, but if my body is asking me to relax then I’ll take a little rest. For two or three years I haven’t stopped much in winter, and this year my body is telling me to relax.  I’m going to listen to my body and see if I take two days or two weeks off. I’m looking forward to Christmas so I can be with my family and friends, and I’ll celebrate with them.”