The two Ducati Team riders produced an outstanding performance at the Sepang International Circuit, with Andrea Dovizioso winning the Shell Malaysia Grand Prix, held on a wet track, ahead of his team-mate Jorge Lorenzo. With this victory, his sixth of the season, Dovizioso keeps the title battle alive and at this point it will go down to the final round of the season at Valencia from 10-12 November.

Dovizioso, who started from row 3 in third place, didn’t get a perfect start and had to battle with Pedrosa on the opening lap. The Italian then caught and passed Marquez on lap 5, before setting after the leading duo made up of Zarco and Lorenzo. On lap 9 both Ducati Team riders passed the Frenchman and then Dovizioso was able to overtake his team-mate five laps from the end and hold on to first place until the chequered flag.

Jorge Lorenzo also did a great race, the Spanish rider getting an excellent start from the second row and immediately setting after the provisional race leader Zarco. The rider from Mallorca took over at the front on lap 9 and when he was caught and passed by Dovizioso, he followed his team-mate home for the runner-up slot.

Monster Yamaha Tech3 Team rider Johann Zarco produced a superb display today in Malaysia to blaze to 3rd and seal the second podium in his rookie season. The notable French star leapt forward from 2nd on the grid and quickly moved into the lead. He remained at the front of the field for eight laps as the rain continued to fall, before eventually meeting the chequered flag inside the top three and as the leading Yamaha rider. The result marks a highly positive close to the triple flyway races and Zarco seeks to repeat the feat at the season finale in Valencia in a fortnight. 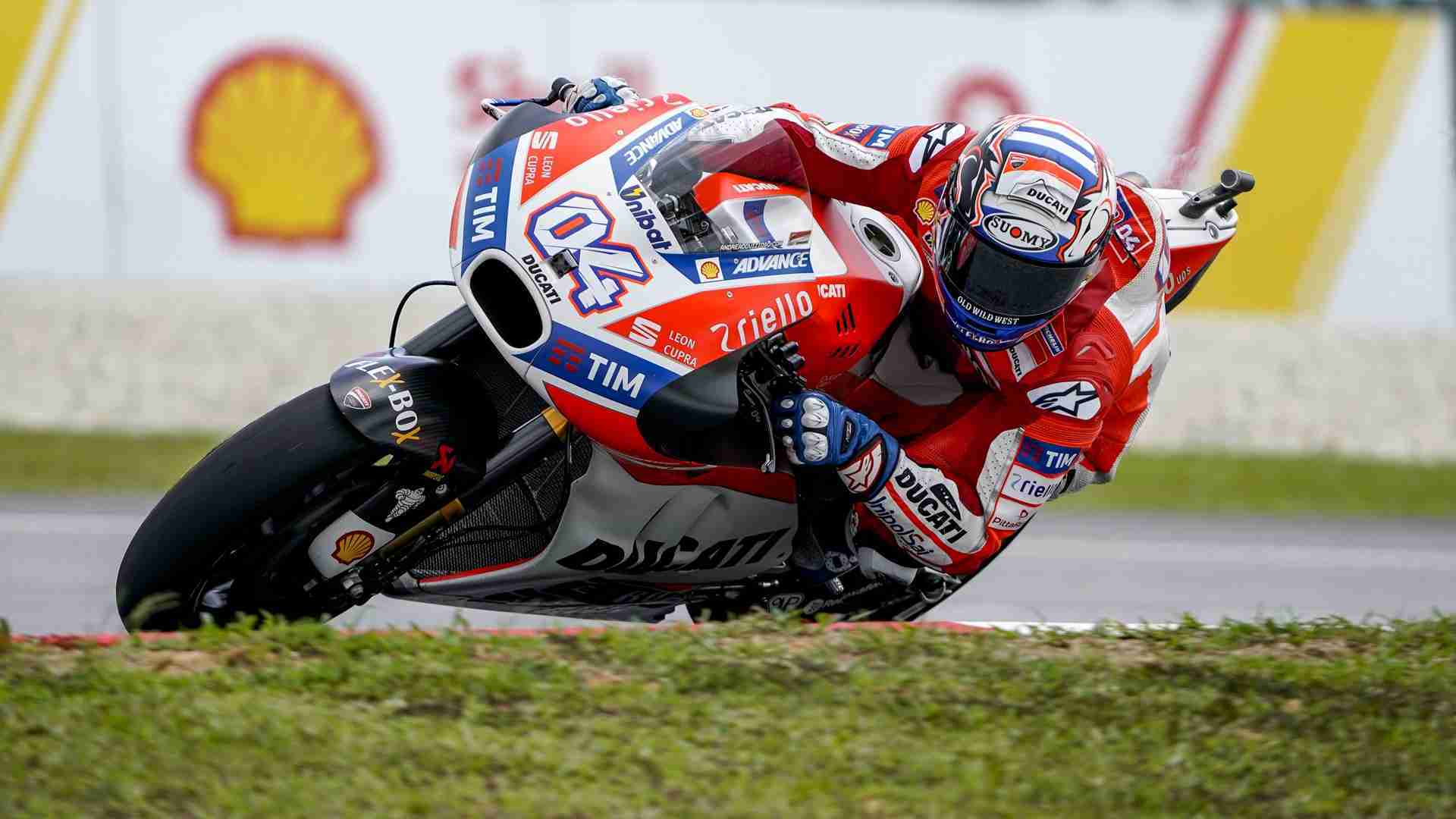 Thanks to today’s results, Ducati moves into second place in the Constructors’ standings with 303 points, two more than Yamaha.

The MotoGP riders will be back in action in two weeks’ time for the final and decisive round of the 2017 season, scheduled for 10-12 November, at Valencia’s Ricardo Tormo Circuit.

“It was a truly perfect weekend: we were quick in every session, both in the dry and in the wet, and today in the rain we dominated. Here at Sepang Jorge and I really had a bike advantage, because our Desmosedici was very fast, and we managed to administer the gap in the best possible way even though track conditions were very difficult because there wasn’t much grip. I’m very pleased for the win which keeps my hopes alive for the title, and even though I know it will be very difficult at Valencia because it’s a track where Marquez always goes well, we’ll be going to Spain with confidence to try and bring home the victory.”

“It was a great race that showed the progress we made throughout the weekend. I was really at ease on the bike, and even though I’d have preferred a dry race, when I saw it was raining I changed my mentality and tried to keep focused, in order to avoid a mistake like Misano. I pushed hard but in the last few laps I was in a bit of crisis with the tyres, especially the front, and had a few scary moments in some corners. It wasn’t the right time to do anything stupid and when I almost crashed at Turn 15 and Andrea passed me I realised that I wasn’t going to be able to fight for the win. I know exactly how important a world title is for Ducati, Dovizioso has had a fantastic season and deserves to fight for the championship right down to the last race. In this weekend Andrea has always been faster and I’m pleased for the team for this first 1-2 win of the season, because it means we’re working really well.”

“It was a great race and I am happy to be on the podium again. I was a bit worried about riding in the wet because when it rained on Friday, I was not fast and overall, Marquez and Dovizioso were pretty quick. Today I used the soft tyre in order to be safe but also to get some feeling and the lap times during the race were not amazing, yet, they were fast enough to lead and I opened up a gap. It was good to start the GP in this way, and even though I felt that I couldn’t push anymore, I did enough to stay first. Then, when the two Ducati riders overtook me, I thought about fighting with them. Eventually, I lost too much in acceleration so I had to push a lot on the brakes. Yet, it was too risky and I lost the rear twice. I wasn’t sure about what to do, however, I expected the track to dry a bit, and then I wanted to attempt to catch them, but I was limited. On the last three laps, I ran alone in third, so I decided to stay focused and the result was already pretty good so I chose to be safe and enjoy it!”