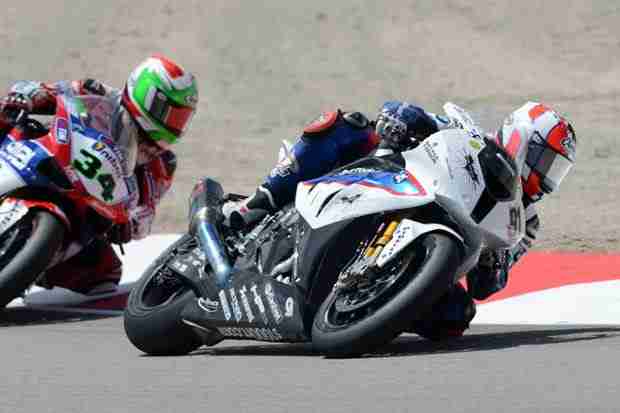 Another victory, another second place, another best race lap, the best ever points result and P2 in the Riders’ and the Manufacturers’ classification of the FIM Superbike World Championship: for Team BMW Motorrad Motorsport makes this “Memorial Day” at Salt Lake City (USA) a memorable one. Factory rider Marco Melandri (ITA) took his second victory on the BMW S 1000 RR in race two at “Miller Motorsports Park” after finishing second in race one. With his team-mate Leon Haslam (GBR) crossing the line in tenth and eighth, Team BMW Motorrad Motorsport collected a total of 59 points from the races today. The previous best result was the 48 points collected at Imola (ITA) earlier this season.

At the start of race one, Marco used the long straight and the powerful BMW engine of his RR to catapult himself from ninth into the leading group. Soon he was second, taking the lead on lap five. He was able to build a slight gap, but then it was Carlos Checa (ESP), who approached from behind and overtook Marco at the beginning of lap eight. Checa and Marco remained the leading duo until the chequered flag, pulling away from the rest of the field. In the closing stages of the race, Marco rode the fastest lap time with 1:48.867 min. He stayed on Checa’s tail, waiting for the right moment to pass, but then settled for second behind Checa on the final lap. Leon improved from 13th to eighth in the first laps, but then was suffering from the same issues he was struggling with throughout the weekend. He crossed the line in tenth.

In race two, Marco had an even better start, passing the whole field on the outside and being in the lead going into the first corner. He lost the lead, but was fighting in the leading group again when the race had to be red flagged after lap four as the track had to be cleaned after an accident. At the restart, Marco was third on the grid and Leon had improved to ninth during the opening laps before the red flag. Marco again shot off the line, taking the lead, but he was passed by Checa while still on the first lap. When the Spaniard crashed on lap six, Marco was back at the top and a nail-biting battle began. On lap eleven, the BMW Motorrad rider slipped back to third behind the new leader Jonathan Rea and Chaz Davies (both GBR). It did not take long for Marco to regain second position and he started to chase Rea. Before starting the last lap, he caught Rea on the long straight, took the lead and defended it to the finish line. Leon improved one position during the race and came home in eighth.

In the Riders’ Championship, Marco improved from fifth to second with 142.5 points, 18 points behind the leader Max Biaggi (ITA). Leon is sixth with 103 points. In the Manufacturers’ Standings BMW improved to second with 176 points behind Ducati (195.5). BMW Motorrad Italia GoldBet SBK Team’s Michel Fabrizio (ITA) was ninth and 12th, his team-mate Ayrton Badovini (ITA) 14th and 13th.

“It is amazing. My team and BMW did an awesome job. Here in Miller it was my worst weekend last year, and it was the worst for BMW, too. So going home with two podiums, a win and a second place, is like a dream. In race one, I was pushing like in qualifying from the first lap until the end. The tyre was working very well until the end. Yesterday we were struggling a bit too much, but today fortunately the weather was better for us. And I was feeling even more comfortable on the bike with less fuel in the tank. I tried to make the life not easy to Carlos, but in some corners, I could not go his line with the four cylinder bike. I tried to catch him, but on the last lap I tried not to push too much because it was easy to make a mistake, and a second place and the podium was good after such a tough qualifying.

In race two, for sure I had a little bit of luck with Carlo crashing. I was struggling a bit in the beginning, and when Johnny passed me I lost the concentration. It took me some time to catch him. But again, when the fuel level dropped down I felt so much better on the bike and fortunately I could pass Johnny on the straight because my BMW engine was so strong. Otherwise it would have been very difficult for me to try to make a pass. I am happy because the bike is working well on different types of tracks. But now we have to be focused, we cannot think that we are going to be on the top every Sunday so we have to keep working. But my team made a great job, thanks to everyone, to all the guys back in Germany. I am so happy and proud to be with BMW. This is the best team I ever worked with.”

“It was a tough weekend. Everything that could have gone wrong did this weekend. Due to electrical issues and other things we missed a lot of track time. In race one we were struggling with the engine brake. For race two we made good steps, the boys had worked very well, but we need to do more. Our lap time was not too bad in race two, but it is not where we should be. The main thing we need to work on is the engine braking.

The long break between the red flag and the restart was a positive thing for me because we could reassess the bike and make some more changes after we lost a lot of time over the weekend. I got a good feeling over the first three laps and we made some more changes for the second part which brought another small improvement. Marco rode well over the whole weekend and now I look forward to Misano where I know we can challenge for the wins again.”

“What a fantastic day for BMW Motorrad Motorsport! Having in mind the extremely difficult weekend we experienced here at Miller last year, for sure we would not have expected today’s results. We knew that we had made steps forward, but we would not have dreamed of winning here. Marco was with the top from the first practice session on until today. Unfortunately it did not run smoothly for Leon this weekend. He had electrical issues and only had very few laps to set up the bike. To make matters worse, he had a puncture in Superpole. I am convinced that at Misano, Leon will be among the frontrunners again.

So far we have been competitive on every circuit we raced on this season. And for Misano we again expect to be fighting for the victory. Tonight we are going to celebrate — after our one-two victory at Donington came with a bitter after-taste, the whole team has deserved a real party tonight. A big thank you to Marco and Leon, to the whole team here at the race track and in Stephanskirchen and Munich. Each of them contributed to this great result.”