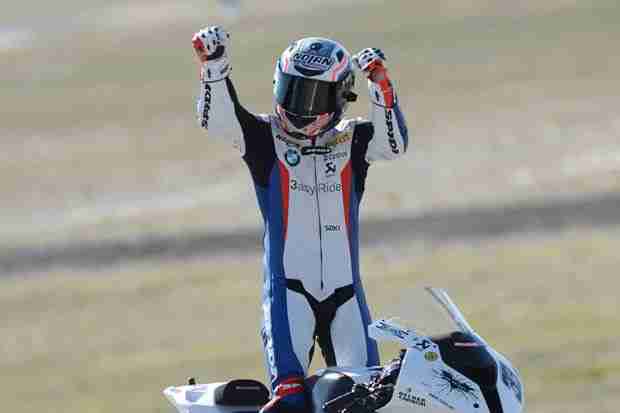 The race was red flagged at the fourth lap when Hiroshi Aoyama crashed out and his Honda leaked oil on the track. The race re-started for another eighteen laps in the same grid order at the time of the crash, with Carlos Checa in first position followed by Marco Melandri and Tom Sykes. Checa at the time of the Honda rider’s crash had taken the lead and had already more that 1.3 second advantage over Tom Sykes and Marco Melandri.

The hour delay was well worth the long wait, as race 2 offered more thrills than race 1 and massive heartbreak for Carlos Checa, as Marco Melandri took his second fantastic win of the season. Checa despite finding himself on the pole was immediately passed by Sykes, but the Spaniard was a man on a mission and wrestled back the lead after just a few turns and began racing away putting a lot of space between himself and the rest of the field and while he was comfortably leading the race after five laps and with a 1.7 second margin, disaster struck. The front of his Ducati suddenly folded and he crashed out. The Althea Ducati rider returned to his garage to have a footpeg replaced, but he later retired.

With Checa out of the running Marco Melandri inherited the lead and he seemed to taking off, but his lap times suddenly began rising and he was quickly caught by Jonathan Rea on lap 11 and then by highly effective Chaz Davies. The BMW rider rallied and after a series of quick laps disposed of the satellite Aprilia rider on lap 13, and then caught Rea’s tail until the end of the penultimate lap and on the straight powered passed the Honda rider into the first turn of the final lap, with Rea trying his best to find a pace to overtake him, but the Italian kept him at bay and took victory.

Max Biaggi scored another third place podium after spending the better of the last part of the race trying to pass an extraordinary Davies, which the Aprilia factory rider accomplished only on the 16th lap when the Welshman began to suffer from tire issues, but he took a highly deserved fourth place, his best result so far this season. Tom Sykes took the fifth spot after he suffered once again from excessive front tire wear and managing to resist Eugene Laverty who was sixth. Davide Giugliano rode to a lonely 7th after a hard pass on Max Biaggi in the opening laps and getting the better on a struggling Leon Haslam. Jakub Smrz ended up in ninth after getting shuffled back to rear at the start with Effenbert Liberty team mate Sylvain Guintoli closing out the top ten.