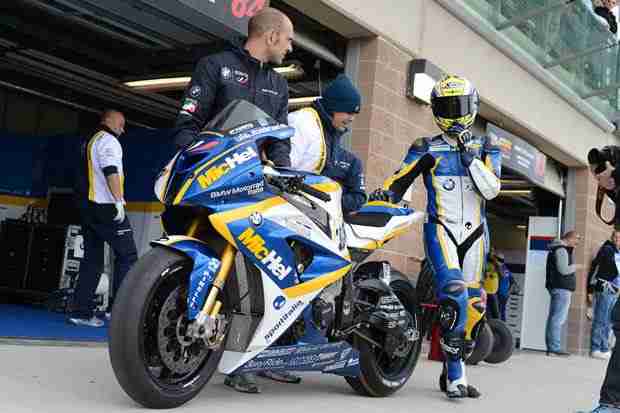 The BMW Motorrad Italia GoldBet Superbike Team has completed the second day of the Miller Motorsports Park round that defined the starting grid order for tomorrow’s two races. From today’s results, Michel Fabrizio will start from the tenth grid slot, third row, while Ayrton Badovini will start from eighteenth position, fifth row. The riders first took to the track today for the second qualifying session. On a partly damp track, that dried up during the 45 minutes of track time, Michel Fabrizio finished with an eleventh place that guaranteed him access to the Superpole while Ayrton Badovini finished eighteenth and so out of top-16.

The Superpole, raced over three sessions on a dry track, saw Michel Fabrizio conquer the first one thanks to a twelfth position and a lap time of 1’49.287. The “Gladiator”, due to a small mistake in the final section of the track during his last fast lap attempt, finished Superpole 2 with a tenth place and a personal best of 1’48.566

“We’re not completely happy with today’s results, especially Ayrton’s eighteenth position, which is worse than any expectation. We’ve done everything we could with Michel and tried every tyre compound available. It was a shame about the small mistake on the fourth split during his last quick lap attempt, without which he’d have probably stepped up to the last Superpole. We’re quite confident for the races because after yesterday’s electronic issues – that were solved today – Michel found a good pace and I’m sure Ayrton will be able to do well, as there’s still some time to evaluate tomorrow during the warm-up.”

“I am sure I could have gone better in this Superpole, but we’ve worked very well race-wise. We managed to close the gap with the front runners, so it’ll be important to make two good starts and to stick with the leading pack.”

“Unfortunately qualifying went wrong, I went back to the pits in the final minutes but there was no time to change the tyre. Tomorrow I will start from eighteenth position so I have to make a good recovery.”