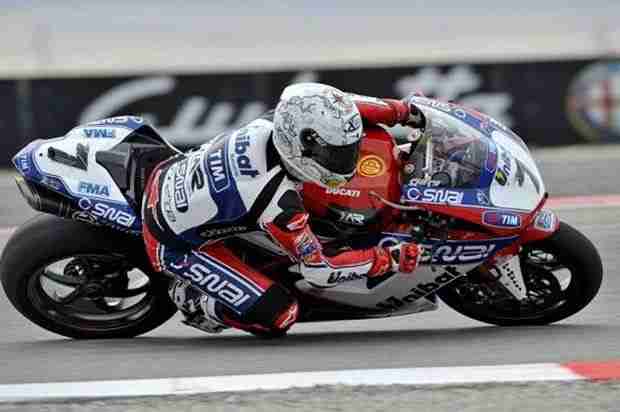 It wasn’t an easy race for the Spaniard, Carlos Checa, especially in the first part, as he found himself boxed in first behind Tom Sykes and then Marco Melandri who grabbed the lead from the Kawasaki rider. Unable to take advantage of his undeniably faster corner entry and exit, as several times his previous overtaking passes were lost on the straight to the much faster four cylinder machines. It took him seven laps to pounce on the BMW factory rider and make it stick and try to clear out, putting as much space as possible on the corners to avoid Melandri catching him on the long straight.

Melandri picked up his pace on the final laps as Checa’s tires began to drop with the Italian cutting down the gap to almost half a second, while the two went around the circuit with almost a matched pace until the Spaniard managed squeeze just a little more out of his tires and cruise safely to his fourth victory of the season. Melandri took an impressive second after having a tough weekend and starting ninth on the grid. He was up to third and then briefly led the race when he powered to the front, only to find a highly determined Checa in his way of taking a second victory for BMW.

Max Biaggi grabbed the third spot on the podium and it wasn’t a easy podium for the points leader as he had his hands full for almost the entire race with a spectacular and battling Jonathan Rea who was much better on the brakes. After being passed with six laps to go, Rea continued to sit on the Italian unable to nose out small space to overtake the defensively riding Roman Emperor.

Eugene Laverty was fifth and he too spent almost the entire race fending off the unwanted attentions of Jakub Smrz, who despite being the pole sitter got shuffled back at the first turn and never found his scorching Superbike pace. Chaz Davies scored his best result of the season in seventh ahead of Tom Sykes, who led for the opening laps, but dropped two spots in lap five after Checa’s pass and then faded to finish in eighth.

Michel Fabrizio was ninth, while Leon Haslam closed out the top ten after the satellite BMW rider got the best of him in the final laps. Althea’s Davide Guigliano who started in fouth found himself shuffled back and ended up 12th.