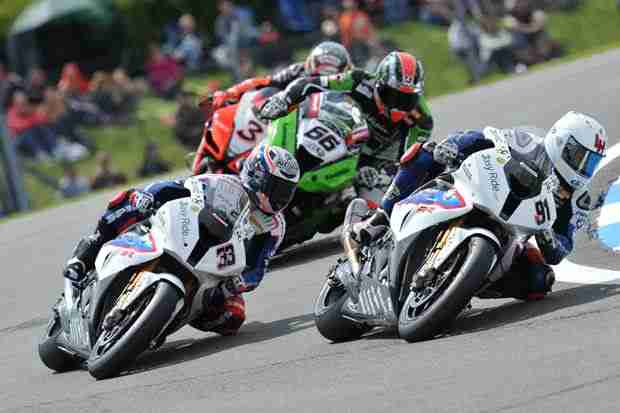 Following the historic maiden one-two in Donington (GBR), Team BMW Motorrad Motorsport now travels to the USA. Round six of the 2012 FIM Superbike World Championship will be held at the “Miller Motorsports Park” near Salt Lake City on Whit weekend (26th to 28th May). The schedule for this event is traditionally moved back a day: race day is always the last Monday in May, “Memorial Day”. As such, the riders will not take to the track until Saturday, with Superpole Qualification taking place on Sunday.

The first major triumph has given the team and factory riders Marco Melandri (ITA) and Leon Haslam (GBR) an additional boost. The performance in Donington confirmed that the team has closed the gap on the front-runners. It is now a case of backing up this claim. A new challenge awaits the team in the USA: the “Miller Motorsports Park” features a technically demanding layout and is located about 1,350 metres above sea level. At this altitude, the engine performance of the BMW S 1000 RR plays a particularly important role.

In the current 2012 season, Marco lies in fifth place in the Riders’ Championship with 97.5 points, while Leon is sixth with 89 points. Together, the pair has already scored 186.5 points for Team BMW Motorrad Motorsport this year. In the Manufacturers’ Championship, BMW is third with 131 points. Only the best result from each race counts towards this championship.

“Miller Motorsports Park is a very nice race track. It is quite fast and smooth but not easy. Normally the track should suit my riding style well. At the moment, I don’t want to expect anything special. I just want to take it one day at a time. This season has shown that the championship is very open and different riders can get to the top and win at every race. I just want to get 100 per cent out of my RR and myself, and then we will see how we are doing compared to our rivals.

The victory at Donington certainly gives us some extra confidence. Getting the first win on this bike was difficult because, although we tried not to think about it, we knew it would be the first victory for BMW Motorrad. This put extra pressure on us. Now we have got that monkey off our backs and are more relaxed and confident. This was the first win, but I am sure that there are more to come.”

“Every weekend now we have been challenging for podiums and have been really close to the win, so we want to do the same in the USA. Last year, it was one of our worst race weekends and I am interested to see how the RR works this year with all the improvements we have made. One problem last year was that the conditions were changing so frequently, so it was not easy to find a fast set-up. We have been watching the forecast for this weekend. The weather looks like being good with temperatures possibly reaching as high as 30 degrees. So hopefully we are going to have some sun.

The circuit at Miller Motorsports Park is a mixture of many different things. For whatever reason, Carlos Checa’s way of riding seems to suit this track. But I have finished second there before, so we know we can be strong.”

“One of the characteristics of the Miller Motorsports Park is the unusual altitude, which affects the engine performance. However, the engine of our RR is strong enough that the loss of performance has no particularly negative effect on our bikes. Regarding the tyre wear, the track could be difficult for all the four-cylinder bikes. Last year, we had extreme wear due to the severe weather conditions. We are nevertheless convinced that, with the latest developments on our RR, we have also improved in this area. So we are looking forward to the US round of the 2012 championship, which has so far shown a well-balanced performance between the competitors. We definitely expect Carlos Checa to set the benchmark on this track, where he has won several times. But we believe that our riders will also be in a position to fight for the podium.

We are all highly motivated, especially after the one-two in Donington. And we are looking forward to getting back the points we lost in the last corner of race two of the British event.”